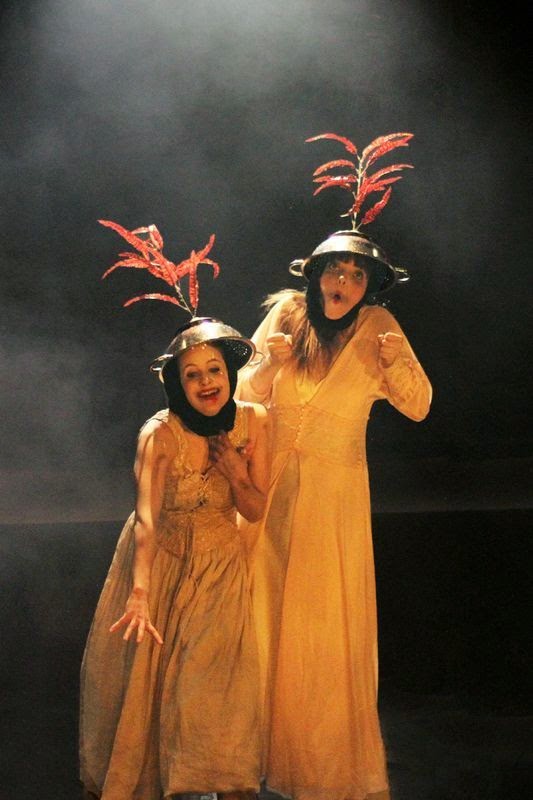 From: Death Married my Daughter

Last Thursday night marked the opening of the Theatre Centre’s Incubator space, where three distinct one-hour plays, by three talented Indie companies, were presented in rep. The subjects of these shows are as diverse as you might expect. What connects them is an innovative lighting designer, André du Toit, and most importantly, a dedication to telling stories through robust physicality.

First off is Ralph + Lina, a true-to-life account of actress/creator Cristina Serra’s Italian grandparent's courtship, marriage and eventual immigration to Canada. Serra even plays beside her real life husband Dan Watson in what makes for an enduring romance that resonates through generations.

The play begins with the couple’s morning routine. As they lunge for the paper in a tango, while Lina absentmindedly pours hot coffee into Ralph’s perfectly placed cup, we know this is a couple who has been carrying on like this for years. This opening display of crabby and comfortable domesticity is impressively realized by these two nimble actors, who use robust physical movement and precise choreography to bring the old couple to life. Indeed, their whimsical acrobatics are the highlight of the show.

As Lina begins to do her husband’s laundry, a familiar smell takes her back some 40 years to the small Italian town where she grew up.  Now, the main story unfurls in flashback. A handsome, but poor young buck, Ralph, in pre-war Italy courts a pretty and coy Lina. This story has its charming moments, but isn’t as captivating as their older-couple impersonations. Things become clichéd when Ralph is conscripted and finally returns to Lina, now betrothed to another. Here the play offers up an echo of that famous Notebook scene: “I waited for you for seven years.”

Things are quickly resolved, however; and soon enough the couple immigrates to Canada, and we return to the charming seniors we know already, as they are preparing to greet their large family brood. Heartwarming and silly, Ralph + Lina is a sweet take on a familiar Canadian immigrant story.

Death Married My Daughter brings two of Shakespeare’s most tragic heroines clawing their way into modernity to castigate modern man. Desdemona and Ophelia appear to us as vampy show-offs, intent at once on seducing and eviscerating their audience with bouffon-style physical comedy.

Nina Gilmour and Danya Buonastella are consummate performers, captivating us with grotesque physicality. Whether mugging for the audience, re-enacting their tragic deaths, or impersonating conservative American pundits, the two show remarkable range while never straying from their characters. That being said, certain vignettes trail off into areas that are too obscure. Obviously Desdemona and Ophelia have a lot to be pissed off about, I just wish their anger had been presented with more coherence. On the whole, however, their vulgarity, sexual frankness, and vulnerability are terrific fun.

Business as Usual centres on a recent spate of corporate suicides. The play features a cast of three finance bros, who play variations on essentially two types: 1) the smug, pompous jerk and 2) his spineless, sniveling subordinate. These guys are obviously having a lot fun exploiting all the comedic potential of the financial world as a tawdry boys’ club, even if their political message isn’t entirely clear.

Some of the physicality is really impressive and adds to the story’s levels of inference. One particularly resonant image involves a vignette where the men stand centre stage in a vertical line, framed by their respective windows. This creates a hall-of-mirrors effect, emphasizing the plight of the white-collar masses.

The show does strike a few false notes. An early gag centring on a 'strong but silent type' in a gorilla mask is simply too obvious. It’s hardly worthy of what these clever guys can do.

Fortunately, this raucous, and energized depiction of the horrors of Bay Street has the audience in stitches the entire time.