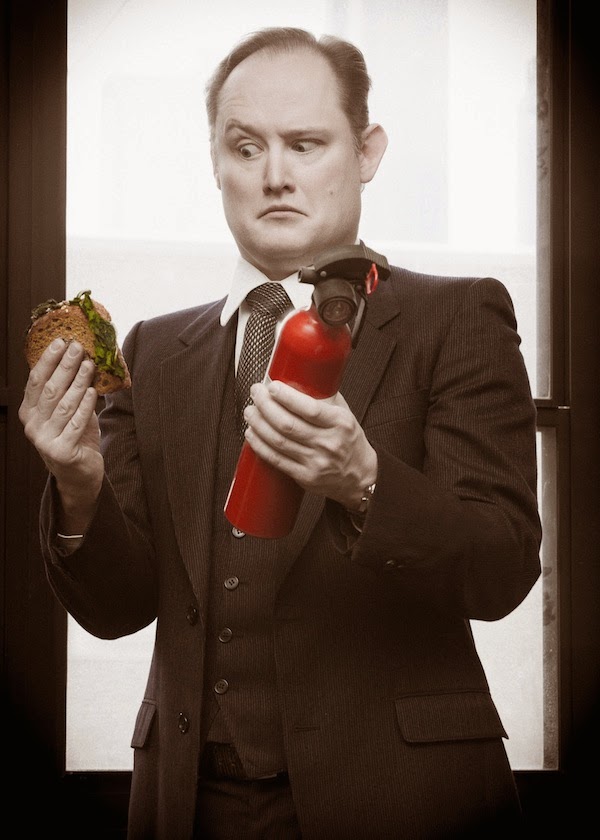 I was full of anticipation at opening night of The Memo. It seemed like exactly the kind of piece I'd love: a comedy that explored the political nature of language in a corporate environment. Written by Vaclav Havel - both a political dissident in Czechoslovakia and the first President of the Czech Republic - the play is a look into the absurd logic of bureaucratic management. It sounded like it was going to be both sharply entertaining and deeply interesting. And it lived right up to those expectations.

The play opens with a company Director attempting to read an official memo which has been written in a foreign language. Unable to make sense of it, he inquires about the language it's written in, only to find that the company is implementing an artificial language in an effort to make company communication more efficient. The Director then sets out on a quest to translate the memo, only to learn that the bureaucracy behind getting a translation locks him into an infinite loop of corporate logic. The perfect language, it turns out, is designed to describe the world so perfectly that there is no possibility of misunderstanding. But in order to achieve this, the language has to be so complicated that it's next to impossible to actually learn. The Director of the company finds himself on a Kafka-esque journey of attempting to find someone who understands the language well enough to translate it, and who at the same time has been granted the authority and documentation to translate it for him.


Directed by Tyler Seguin, the production brings this bizarre reality to life in ways that are both hyper real and subtle. The play itself takes place at Unit 102 Theatre: a slightly cramped black box space, which turns out to be an appropriate venue to stage the story of a claustrophobic corporate office.

The production manages to walk the line between delving into some pretty dark ideas while remaining consistently entertaining. Cara Pantalone was one of my favourites and was hilarious as the Chairwoman, constantly bent on deflecting questions by making tea and coffee, and hosting parties to which the Director is never invited. "Where do you keep the coffee??" she snarls at her harassed secretary, Alice. "Sorry, what did you say?" she coos the next second. Her alternating hostility and charm is an example of the larger theme of passive aggression and manipulation between the different characters more generally.

There is a reversal of power in the second half, which only leads to similar issues with the quest for a translation. The new Director questions the various office workers, trying to figure out a solution to her problem, only to realize that the translator can't translate without authorization from the Doctor, who can't authorize anything without documentation from the Chairwoman, who can't issue documentation until she knows that there will be no conflict of interest with what is being said in the memo. Which, as she points out, she can't know until the memo has been translated. But it can't be translated because… of the vicious circle of the bureaucratic system. Red accessories highlight the grey uniforms in the second act, replacing the yellow in the first half, reminding us that although things have changed, they remain the same. New leadership can't really change things, and none of us is bigger or more powerful than the systems and structures in which we find ourselves.

There was also an underlying worry articulated throughout the story that the new language would be bastardized by 'natural' language - that if you let it live and breathe enough in the hands of people, that it will inevitably be corrupted by the imperfections of humanity. But the purpose of the language, it turns out, isn't as innocent as increasing efficiency. The language perpetuates and reinforces power structures at the company. For one, it decides who it includes and who it excludes, and reinforces who is and is not an authority; who is and is not on the inside. In other words: language is always already part of human practices of one kind or another, and although the new artificial language wasn't designed to fragment the company, it brings out the cracks of a structure that is already alienating people from their own humanity. Language has an inevitable social dimension, an aspect that can be used to destroy as much as it can be used to unify.

And what the relationships between the characters remind us of is the fact that so much of human communication happens in between the lines: the language professor doesn't need to tell us he lusts after his ambitious young front-row student; we don't need Alice to tell us that she's in love with the director, or for Syd Kunc to tell us he's a terrible human being: they show us this more vividly with their actions than they could tell us with their words. And the play shows us more about language and politics than any of the characters could say. A definite must-see!

Running time: 2.5 hours, including intermission
Posted by THE CHARLEBOIS POST at 6:04 PM