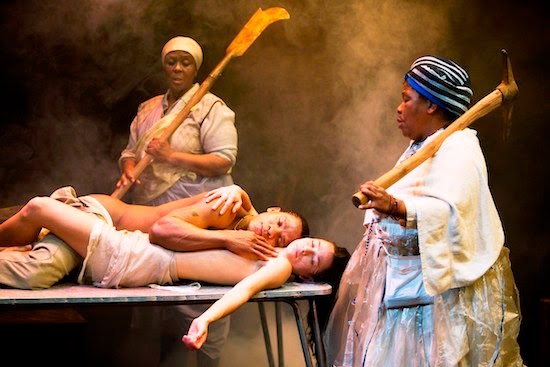 History repeats itself, over and over again.
by Chad Dembski

Often in reviewing live events we are able to get two tickets to a show and invite a friend or peer to see it with us. For Mies Julie, which opened last night at Place des Arts in their 5e salle series, I invited a designer who I have collaborated with a couple times in the past. A work as complex, intense and layered as Mies Julie deserves a good discussion afterwards as it is a piece with many ideas.

The play seems to almost begin the moment you walk in the lobby which is filled with smoke that is pouring from the theatre. As I entered I noticed one of the performers sitting in the audience on the far side right who seemed stoic and highly focused. The lights faded down and as the music swelled I got the chills associated with those first moments of an event where you are not quite sure what will happen. The woman in the audience got up and slowly made her way to the stage, adding singing to the music mix and providing a wonderful atmosphere to the mysterious beginning. As each performer entered from the audience doors I got a sense immediately that this would be a more radical adaptation of Stringberg’s classic tale of innocence to experience. Immediately a physical nature is established by the two main characters; Julie and Peter, jumping off tables and using the stage to maximum effect. Physical repetition is used quite often; Peter polishing black boots, over and over again and Julie pulling at her dress and hair. This connection to the physical nature of all three performers was transfixing as I don’t often see so much physical interpretation of character in Canadian theatre.

Yet the moment Julie began to speak in a loud, highly enunciated tone my connection to the piece started to break. My suspicion is that Yaël Farber, the director, told the two main performers to come in at 10 (out of 10) and never to let the energy drop. Much to their credit Bongile Mantsai and Hilda Cronje give it their all from the very beginning to the bitter end but almost to an alienating degree. The piece could not build properly as it seemed every scene had massive importance and was a matter of life and death. By exploding all of the piece constantly it was hard to decipher what or who to actually care about. Yet amongst this over-the-top performance choice was the anchor of the piece, the Mother of John Christine (Zoleka Helesi) who had a beautiful almost butoh-like focus and intensity. She grounded the piece in the reality of contemporary South Africa where I felt I actually got a sense of both of the history and twisted complexity of The Karoo (the setting of Mies Julie).
What is strange for me was that I felt transported by the various elements in the piece, the bass rattling ambient music and dreamy saxophone, the messy and simple kitchen setting and many shades of yellow lighting. I had a feeling ¾ of the way through that it would be astounding without any speaking. I know this is an absurd concept for a theatre piece reliant on text but somehow the speaking in the piece was the one element that was the most disappointing.
Still as half of the crowd stood up at the end and gave a boisterous ovation I couldn’t help thinking that maybe I missed something or was afraid to let the piece overtake me. Mies Julie has received rave reviews in its multiple city tours including NYC, London, Hong Kong (it's on to Toronto next week), so I imagine I am in quite a small crowd of people not in love with Mies Julie.

At the post show discussion I did have an animated and lively discussion afterwards with my friend and I feel in the end that is perhaps the best gift of any show, the power to challenge what you think you know and feel about the world.
April 24 - May 3
Also at Toronto's World Stage May 6-10
Read also Chad Dembski's interview with Yaël Farber
See also a video for the production from its run at the Cultch in Vancouver
Posted by THE CHARLEBOIS POST at 4:39 PM