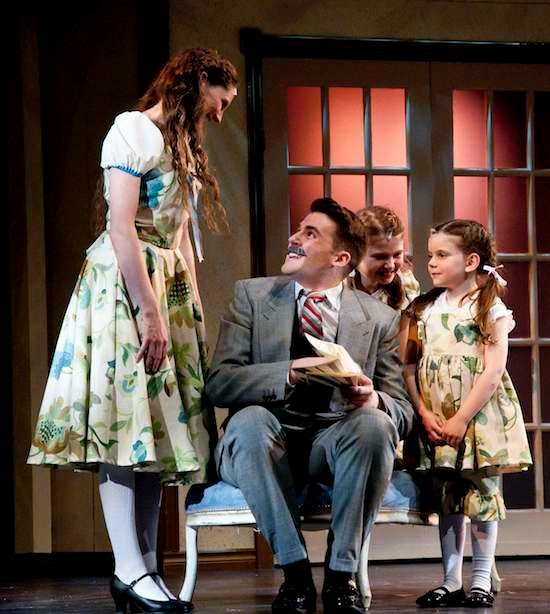 (photo by Seanna Kennedy)
How do You Solve a Problem Like This?
The LOT’s new Sound of Music feels like climbing uphill
by Stuart Munro
@StuartMunroTO

Staircases on mountains. Grapevining nuns. The Lower Ossington’s new production of  Rodgers and Hammerstein’s The Sound of Music certainly is an interesting take on a well-loved classic.

Let me start off by saying something controversial – The Sound of Music is not a very good show. When it opened on Broadway in 1959, its simple, perhaps overly-sweet story was met with mixed reviews. Even my mother found it too sentimental when she saw it in London in the 1960s. It’s because of the successful 1965 film version that The Sound of Music has entered our public consciousness as one of the Great Musicals of Our Time. Had the movie not been toned down the way it had, I’m not sure this would have been the case. As a result, any new production must contend with the less-than-perfect book by Howard Lindsay and Russel Crouse and attempt to find the real heart of the story buried beneath all those layers of sentimentality.

Sadly, The Lower Ossington Theatre hasn’t accomplished this. It hasn’t even tried. Their newest production, currently running at the Randolph Theatre, is so confused and overworked that no sense of story comes through at all.


The largest problem is Michael Galloro’s mammoth set – a giant pair of staircases running down either side of the stage, connected by an upper level, and with a doorway between them. This set works remarkably well as the von Trapp family house and, with some clever lighting tricks, as the office of the Mother Abbess at Nonnberg Abbey. But it is, sadly, harder to believe that Maria is running up a rugged mountainside during the show’s iconic title-tune as she carefully climbs stairs and stands behind a railing up top, while only the tips of painted-fabric mountains peek out over her head. The set is too literal to meet the demands of versatility imposed upon it and, as such, no one ever seems to be in the right locale. Mikael Kangas’s lighting is often unobtrusive, but I found myself wondering why there appeared to be lightning inside Maria’s bedroom during “The Lonely Goatherd,” and Kathleen Black’s well-designed costumes suffer only from the materials from which they are made. There are many sound issues, with static, feedback, and missed cues being the norm over the course of the show.

A few performances manage to come through, despite the design issues. As Maria, Michelle Nash is sweet and charming – it wasn’t hard to see why the children fell in love with her, though her lovely voice was sadly hampered by the problematic sound design. Emma Ferrante’s Frau Schmidt came across as easy and natural and was easily the most unaffected character on stage. More problematic were Greg Carruthers’s Max Detweiler, whose constant adlibbing had me wondering if the Rodgers and Hammerstein Organization could accuse him of attempting to rewrite the part; and Barrett Morrison’s Captain von Trapp, who was too sweet off the top to go through enough of a transformation to make it meaningful, seemed to be more interested in Max than in his fiancée or wife. Perhaps most disappointing of all was Adeen Ashton Fogle’s Mother Abbess who, in addition to being far too young for the part, simply lacked the vocal ability necessary to sing “Climb Every Mountain” properly.

Michele Shuster’s choreography, while effective in numbers such as “Do-Re-Mi” and “So Long, Farewell,” goes wildly awry during “Maria,” where she has the nuns doing box steps, grapevines, and lifting up their habits to show off their feet and ankles whilst they do a crab walk. Even more shockingly, the wedding of the second act turns into a wild dance number that looks straight out of a southern revival meeting, not a Roman Catholic Mass. The music, directed by Robert Wilkinson, is often too slow, causing things to lag; and the five-person band had trouble with cues, or even playing cohesively together.

Many of these issues are the fault of director Jeremy Hutton, who seems to have given up at some point during the rehearsal process. The dialogue is all too fast – there’s never a moment to let certain key lines rest and impact the scene the way they need to – and it almost feels as though his only real goal in this production was to make sure everyone said the right line at the right time. No more thought seems to have been given to any of it (including some of the proper pronunciation of German words). Even the program feels like an afterthought, with certain casting missing from the main character list, and a song list that represents the original production from 1959, not the version used here that includes the songs written for the film, “I have Confidence” and “Something Good,” the latter of which replaced “An Ordinary Couple” which is still listed in the program.

I’ve seen some good things at the Lower Ossington in the last year, but this careless production has set them way back. A well-loved property such as this needs even more attention, as everyone coming in to see it will have a strong opinion. Producing something so thrown together is nothing short of lazy.