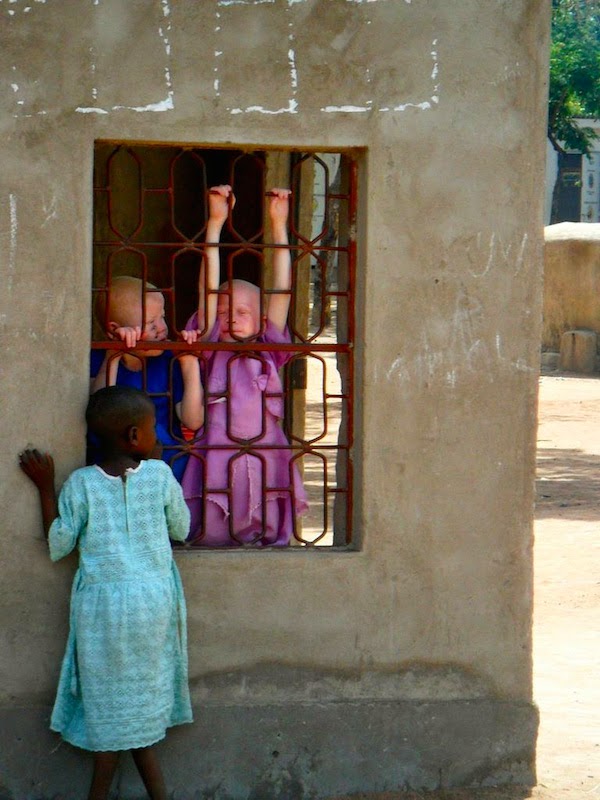 The audience is seated, and the house lights are up, but so are the lights trained on the stage. The sounds of birds and other animals cooing and clicking echoes through the venue (Montreal arts interculturels). Meanwhile, actors walk the stage, warming up in the way that they do: traipsing through the set, stretching, mumbling, making playful sounds to limber up their mouths and lungs.

This was the first 10 minutes or so of Blind’s first Saturday showing, and it was a slow and methodical build to the enterprising story about to unfold.


Hannah (Lydia Zadel) is a white woman from Quebec, an official observer on her first trip to Africa in order to evaluate an NGO that is hiding and nurturing children with albinism in Tanzania.

The children need protection, because to be born with the condition in certain parts of Africa is to be sentenced to certain persecution, and even an early and likely gruesome death.

Albinism is a genetic condition where the skin, hair and eyes lack pigmentation; it can lead to blindness and higher rates of skin cancer, among other conditions. Recent reporting has blown the lid off the ruthless targeting of people with albinism in the East African country, where they are reviled and rejected as bad luck. Their chopped-off body parts, however, are desired as powerful good luck charms by the power-hungry. Several fatal attacks have been reported in recent years, with perhaps hundreds more going unreported.

The story is inspired by the playwright Lindsay Wilson’s own trip to Tanzania on a research and development grant a few years ago. Like Hannah, she herself was an observer, with Under the Same Sun, an NGO dedicated to work with children with albinism. (The Canadian charity was founded by Peter Ash, a former Montrealer who has albinism.)

Drawn to the stories of the children living under these sheltered but precarious conditions, but also curious about the other Westerners driven to travel to Africa to help the unfortunate, Wilson has crafted a tale that both documents the tragic difficulties faced by Africans with albinism, and the well-intentioned but questionable help coming from Western NGOs and volunteers.

Wilson’s first feature piece is an ambitious project, and as director Alison Darcy put it during a talkback session, the play is a work-in-progress. The docu-theatre hybrid has several developments to follow: the progress of each of the four children featured, Hannah’s own frenetic realizations,  as well as the challenges facing the school operators, Christine, Alex and Mosi. Blind is critiquing a laundry list of problems: Western assumptions and meddling in Africa, local corruption and indifference, the blurring boundaries between religion and superstition, the ostracization of the other.

It’s a hefty project to handle, and there is no clear and satisfying ending. This led me to wonder if the myriad of critiques and stories need to be whittled down. But Blind doesn’t close up this Pandora’s Box with a neat bow, and it doesn’t need to. It just has to beg the critical questions, of which there are many.

Under Darcy’s direction, Blind is an imaginative and creative production from Scapegoat Carnivale Theatre, complemented by traditional storytelling and an atmospheric and lush soundscape. The set design is simple but versatile. And the crowning achievement: seven actors, each of whom deliver top-notch performances infused with sympathy, beauty and realism.

The April 11 showing features a talk from Peter Ash, founder of Under the Same Sun.