In a Word... Actor Nonnie Griffin on Marilyn After

A veteran of Canadian theatre and Andrew Allan’s fabled CBC Stage radio series, Nonnie Griffin is indelibly remembered for her appearances in such Toronto productions as Hello, Dolly! Waiting for the Parade, Tremblay’s The Impromptu of Outremont, Ring Round the Moon, and The Sea – for which she was named Best Actress of 1977.  She is also the author of Sister Annunciata’s Secret, based on an actual incident, in which she plays six characters. Her play brought audiences at the 2012 Edinburgh Festival to their feet and high praise from critics. She is also the author of SHOWBIZ and other addictions, published by Mosaic Press and endorsed by writer Timothy Findley, who called her “magical”.

CHARPO: You have had, especially considering it’s Canada!, a fabled career. What were some of the highs (and, if you like, the lows)?

GRIFFIN: The highs have been many. When I began, there was only one repertory company in the country, the Canadian Repertory Company (CRT)  in Ottawa and I was asked to be the resident ingenue at 19 years of age. William Hutt was the leading man, William Shatner (of Startrek) their juvenile, plus Eric House, Barbara Chilcott as well as other notable Canadian performers. CRT had hired the new famous and excellent actor Christopher Plummer the year before.

We had one week to rehearse any production but the standard of acting was always excellent even with the classics such as Chekhov's The Three Sisters. Another 'high' was being discovered by the great Andrew Allan in Lister Sinclair's new play, The Blood is Strong, who cast me opposite John Drainie. I went on to do countless productions in Mr. Allan's 'Stage Series' and other radio work. This was what they now call The Golden Age of Radio and it was.  Later, I was in the first musical production of Anne of Green Gables and from there, went to England for three years, the highlight being asked to be part of the Bristol Old Vic theatre company and travelling with the company to Lebanon with two Shakespeare productions in 1960. (cont'd) 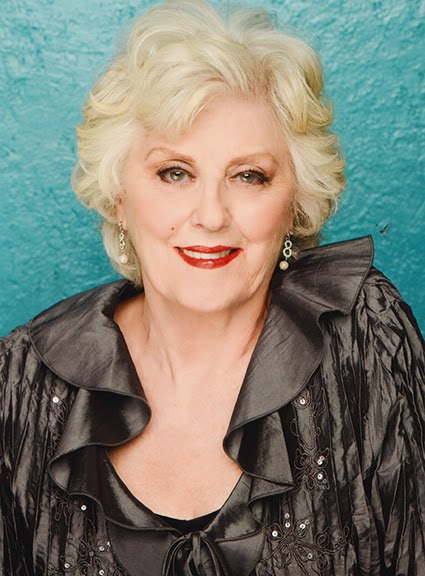 GRIFFIN (cont'd): Back in Canada, I have to mention playing Billie Dawn for both Theatre New Brunswick on the East coast and Bastion Theatre on the West. I feel I was one of the ideal choices for Born Yesterday and the director, Edwin Stephenson, booked me in 1973, a full year in advance of rehearsals. Doing that show was a trip to heaven!

Skipping to 1977, I was in the first production of Edward Bond's The Sea and was named Best Actress by The Star's Gina Mallet. It was a runaway success. Toronto lined up around the block to see this small theatre production. Since then I have done Hello Dolly for seven months in Toronto, many television shows, regional theatre productions from East to West as well as appearing with Toronto's Tarragon Theatre and Montreal's Centaur Theatre. Lately, my play Sister Annunciata's Secret, which went to the Edinburgh Festival in 2012 was definitely a highlight as is my present work in which I star, Marilyn-After and which is going to Stratford for two performances. Most definitely a highlight!

The lows? The CBC gave up producing radio plays with those first-class actors and writers that one by one are disappearing. We were world-class and it's a great loss for us all. More than that, it is profoundly sad. Even tragic. And there is a lack of awareness of performers, such as myself who have given all they can to the art of acting in this country. In England, those who have survived to a good age and who are still doing film and stage are revered. I wish it were different in our country but it isn't.

CHARPO: We have actually met, years ago, when you were doing Jitters at Centaur and I worked in PR. This just reminds me that actors in Canada spend a lot of their time on the road. Do you still, and does it get wearing (and where is home)?

GRIFFIN: Perhaps you should send me a photo of yourself so I can be reminded of Gaëtan Charlebois who I met back in the 80's!

I haven't been on the road for awhile but going to Edinburgh was a good 'out of town' gig! It was wonderful! I did many out of town shows, and I must say, it isn't the easiest of experiences. I always love the audiences, but being away from close friends can be somewhat lonely at times. One rather sad fact is the attitude of some actors in certain cities out West. The East has (or had) a bad name. I found it hard to deal with - but of course that wasn't the case from everyone. But many were prejudiced and that's a tough thing to handle. I kept thinking 'but my mother was from Edmonton!'

CHARPO:  Now tell our readers about your relationship with Marilyn Monroe.

GRIFFIN:  Marilyn Monroe always had such magic for me and such beauty. More than that, her deep-down self seemed to come through in the roles she played. I actually dreamed I was with her. I said to her  'Marilyn I want to be your true friend'.  'Oh thank you Nonnie. I need one!' I feel that I was somewhat like her. I had a great figure, was blonde and I also had that innocence that she had. It doesn't matter whether she had ten lovers or a thousand, she kept that quality of goodness always. Of course I identified with her struggles and to me she had the actor's true gift. She transcended every role she ever played and felt she owed the public the best she could do. She was always aware of her audience and how she wanted to come across. I feel sad that there was prejudice towards her. She was capable of so much more than the roles she played but it was a question of exploiting her incredible beauty and sensuality. Within herself she knew she had the genuine talent, but like most who are greatly talented, she had very high standards and great doubts about her talent. She had a rough childhood and no real parenting. But Marilyn had incredible courage and actually, she is a miracle. I feel honoured to have this chance to portray this great woman.

CHARPO: I’ve noticed in the list of books you have used as sources for your play that one is conspicuously missing: Norman Mailer’s biography. I bet you have something to say about why that is not there.

GRIFFIN: There are many, many books about Marilyn. She is one fascinating subject. I feel that Norman Mailer was exploiting her and that his book was from a man's point of view that really gave no insight into the sensitive woman that she was. All I could learn from him was how attracted he was to her. What I needed to know was what she herself felt, not his interpretation of her apparently great sexuality. Telling her story, I was searching for the truth about her and what actually happened at the end of her life. He didn't supply that.

CHARPO: What are the plans for the work after Stratford, and for you outside of this play?

GRIFFIN: After Stratford my director, Peggy Mahon and I will be taking the show to one of the small theatres in Toronto for eight or nine performances. It needs a run and that's what we intend to go for. I want to present my other play, Sister Annunciata's Secret possibly at Stratford. It is a topical and important issue regarding the sexual involvement of a religious woman with a young piano student. It presents an unusual story of what an 'abuser' goes through. It is quite compelling and is based on a true story told to me by 'the boy' a while ago.

CHARPO: It's easy for me to comment on your accomplishments from the outside but I have to ask: Are you satisfied with your career?

GRIFFIN: I am amazed that I managed to make my living in the most precarious profession in the world. How did I do it? The answer is - there is help from above and of course help around us here and there. It takes such faith to keep going at times, and I have that. It's a gift for sure. To be satisfied with my career would be to say 'well, that's over!' But it isn't. I would like to be recognized and appreciated and sometimes I am. The best thing would be to have the Marilyn show staged off-Broadway or even on Broadway. Americans are great appreciators. So are the French in this country. They love great acting and they let you know it! If Toronto had their love of drama, it would be wonderful. Someday, maybe.