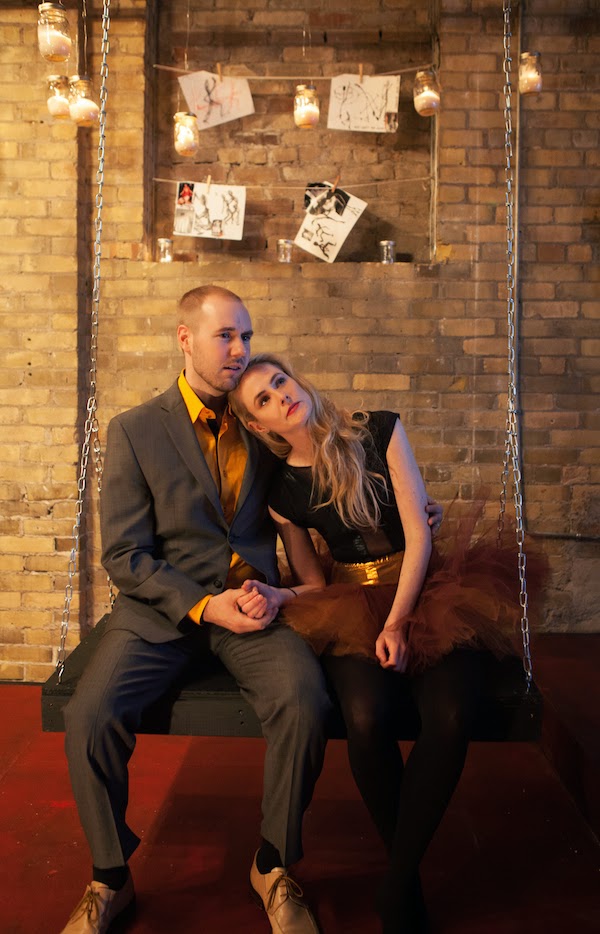 (Photo by Angela Besharah)
Intimate take on Wilson’s play is busy, noisy, and kind of numbing.
by Christian Baines

Anna (Ashleigh Rains) has been living for three years with her Gay (uncoupled) roommates Robbie and Larry (Jason Stroud). When Robbie is killed in a boating accident, his brother Pale (Kyle Labine) arrives on Anna’s doorstep. Pale is angry and unpredictable, but with her friend and longtime collaborator gone, could he be just what Anna needs?

This intriguing setup leads to what’s ultimately a very safe, straightforward play masquerading as a dangerous one. Burn This is full of shouting (Pale), angsty-hand-wringing (Anna), and familiar Gay tropes (Larry). Some of those tropes would have been ground-breaking when Lanford Wilson’s play debuted in 1987, but they now come across as something of a ‘Queer Eye’ era museum piece – undoubtedly beyond their original era, but never quite contemporary either.


You can see the actors working hard on Sterling Studio’s tiny stage, but that’s also the main problem with this production. It simply tries way too hard. Rains’ Anna is never relaxed enough for her dialogue to sound natural, so we never get a true sense of what she’s going through, nor do we understand the need that drives her actions with Pale – who’s even more inaccessible. Labine enters the play at top volume, shouting his way through dialogue, barely letting the wall down for a minute. Far from ramping up the tension, the result is numbing, laying waste to any of the subtleties in Wilson’s script. It’s hard to tell even by the play’s end who Anna and Pale really are.

Sean Connolly Affleck gets the thankless and slightly redundant part of Burton, Anna’s longtime boyfriend. It’s hard to tell if the flatness of his delivery is an attempt to differentiate him from Stroud’s animated Larry, but it’s dull and uncomfortable to watch. We at first get the sense they’re defining themselves as ‘gay guy vs straight dude’ rather than as two fully realized men. Burton’s apparent insecurity about male contact doesn’t really feel credible between two men who’ve known each other for years, and seems particularly weird once Burton reveals another detail of his past. In 2014, this scene comes off as weirdly condescending, particularly in light of Affleck’s earlier awkwardness. Finally, midway through act two, he lets this face fall away. Only then do we get to engage with his character.

Speaking of credibility, would Larry really be play-hitting on Anna’s boyfriend after all this time? Wouldn’t the novelty have worn off? It probably scored a few laughs in 1987 – maybe even when the play was revived in 2002. Now it’s just quaint and silly. All credit to Stroud however for being the only actor onstage who seems completely comfortable in what he’s doing, even if the play never once delves into his character. He’s faithful, supportive – and funny, yes. But the whole gay best friend as comedy relief thing is beyond tired now.

As ‘single girl falls for Gay friend’ stories go, Burn This certainly has a fascinating and original take that feels fresh, even today. But the heavy execution prevents those themes from shining through. In the end, after watching Anna try to break through Pale’s wall of fury and noise, we’re left more numbed than enthralled.

[PUB: This will be Christian Baines final review for CharPo for at least a year. We cannot express how wonderful it was to work with the fine writer and fine man. Bon Voyage, good sir, and do come back! / Gaëtan L. Charlebois]
Posted by THE CHARLEBOIS POST at 5:20 PM