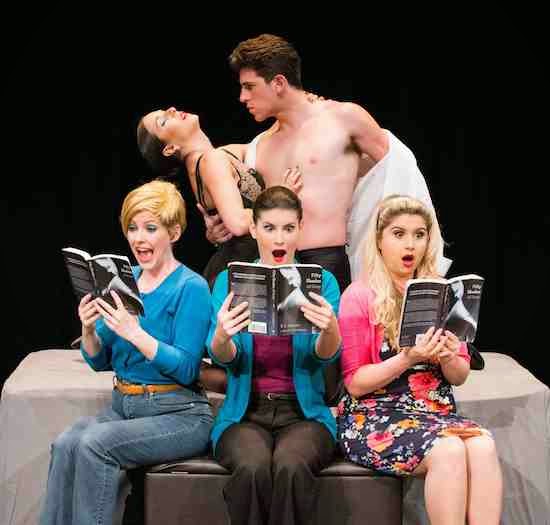 No, really. I’m convinced this once noble comic form passed away with the great Leslie Nielsen and I sincerely doubt we’ll see talent on par with the Zucker brothers ever again. What did these guys understand that today’s spoofsters don’t? Perhaps that writing good parody is hard work. Hell, it may even be harder than writing your own material.

Even hit musicals like Spamalot and Evil Dead start to wobble under their own self-awareness in the second act (particularly Evil Dead). Still, both these shows demonstrate enough genuine commitment, inspiration and most importantly, love for their source material to carry them home. They also firmly ground their laughs in what made their subjects so great in the first place.


50 Shades the Musical does not. It instead takes a surface reading of the original material, – which it then goes on to call a terrible book… umm, okay? – slaps it over with gross-out gags and spits it out with all the wit, charm and sophistication of a 14 year old boy who’s stumbled across the kinky issue of Hustler.

It doesn’t matter if 50 Shades of Grey is a terrible book (or not?). That doesn’t give 50 Shades free reign to be a terrible musical. Xanadu showed us that worthy stage parodies can come from dreadful source material. By framing its story through the eyes of a small book club, 50 Shades knocks at the door of the novel’s phenomenal mainstream success – ripe stuff for an affectionate, even insightful parody.

Such parody however seems quite beyond the talents of the show’s 7 (!) writers and composers. They also seem unwilling to inject the slightest hint of wit or originality into the book, lyrics or score. Apparently written by committee, 50 Shades takes the low road at every opportunity. Its characters are flimsy stereotypes riddled with bizarre choices, none more so than the parody of sadistic millionaire Christian Grey himself. Far from connecting to the source material and making fun of E L James’ easily ridiculed ‘perfect man,’ the creators go the lowest possible route by turning him into… wait for it… an overweight, bearded, hairy ginger dude. Because this embodies every male trait that’s not sexy, and therefore must be hilarious, right? Right?

We’re also invited to laugh it up at his red mankini, guffaw over his graphic, frat-boy descriptions of what he plans to do to Ana… eh, whatever her name is, and squirm with ‘delight’ as he points to various audience members proclaiming ‘I’m gonna fuck you.’ He even throws in a couple of Canada-specific ‘jokes’ for extra cringe value.

That’s the level we’re at folks. And frankly, if I want to watch an offensive buffoon strut around surrounded by dumbstruck onlookers, I’ll sit in on a session at Toronto City Hall.

When it’s not trying to gross us out, 50 Shades the Musical is simply dull, finding traces of life only when it cuts back to our friends at the book club. As for content, the show proudly disclaims that it ‘does not cross boundaries that would make general audiences squirm.’ Maybe it should – if only to wrest it free from utter tedium. While I know better than to go into a play expecting an intelligent or informed take on BDSM culture (and I certainly wouldn’t look for it in a show like this), this is yet another opportunity squandered in 50 Shades, given the response many in the real kink community have given the novel.

I’d like to think that great parody is still – faintly – within our cultural grasp. 50 Shades the Musical however is just the latest argument for lost hope. I sincerely doubt that any amount of spanking will whip it into shape.