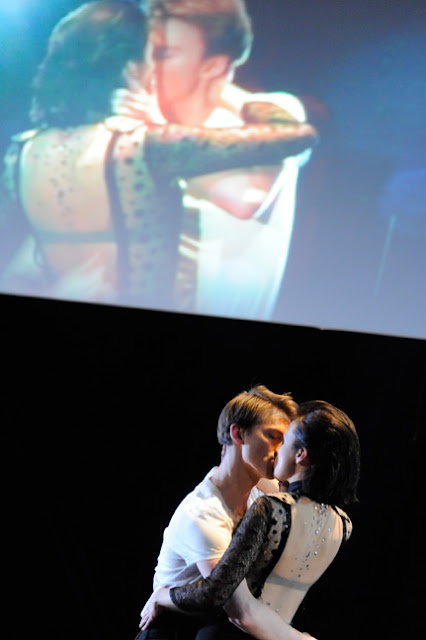 To Take a Different Tack
by Caitlin Murphy

I think I’ve reached a theatre-going quota.  A sort of saturation point.  I feel sated, full. Perhaps so much so, Mr. Creosote, that it is indeed a good time for that bucket.  The source of this indigestion:  high-concept, low-return subversions of Shakespeare.  The National Theatre School’s graduating class’s production of Twelfth Night, under the direction of Jason Byrne, falls sadly into this category.

The stage here is very consciously stripped back to its bare bones – the doors and exit sign, costume racks, and actors waiting ‘in the wings’ are on view throughout.  The minimal set consists of a round platform with chaise longue, streams of white material hung at stage left, clay faces littered on the ground, and an over-used and under-integrated projection screen.  Costumes seek to provoke:  Orsino topless in heels and leopard-print tights, Olivia seemingly dressed for a naughty figure skating routine.

These felt awkwardly unhinged from story or character, creating a hodge-podge effect.

We learn in NTS’s promotional material, that director Byrne sought “to take a different tack” with the play and considers Twelfth Night “a complex psychological piece – quite tortured and melancholic and not at all a light comedy.” This goes a fair distance to accounting for the play’s stubbornly sluggish pace, and willfully flat tone, but I’m not sure it justifies it.

Too many of the production’s elements felt for their own sake – a hand-held mic passed between actors, a revolving stage, on-stage cameras projecting the play’s action on the overhead screen, the numerous ‘old-timey’ videos that seemed culled from hours spent on Youtube in search of hip clips.  These felt awkwardly unhinged from story or character, creating a hodge-podge effect.  We too easily confuse piling on with adding up.  Like an outfit with too many accessories, you just didn’t know where to look in this production; unity, coherence and clarity seemed sacrificed at the altar of novel excess.

There is an irony in doing Shakespeare when one is clearly intent on doing something else:  the something else only has its sought-after cache because it’s understood as ‘fucking with’ Shakespeare.  It’s not that I’m simply against modernizations or re-interpretations of Shakespeare though; I don’t actually like the guy enough to be a purist.  The National Theatre recently did a production of Timon of Athens, set against the backdrop of the Occupy Movement, a choice that could have felt gimmicky and contrived, except that it didn’t.  The idea was thoroughly thought out and cleverly integrated, and, as a result, the production was brilliant.

In the final moments of Twelfth Night, the thesis of Byrne’s interpretation seemed to be that we can no longer play comedy – any attempts will have to be feigned, disingenuous or ironic.   The trouble with this interpretation is that we see it so much already – bored, stylish hipsters are the status quo – so in some ways it feels like a non-interpretation.

I kept getting the impression that it’s somehow become uncool to work at delivering plot, conveying character, underlining conflict, being clear – like, “we’re so over that.”   One must think hard about academic interpretations and stylistic choices explicitly designed to have a distancing effect.  The rigour of Shakespeare’s language, I would argue, has a built-in distancing effect for most audiences.  There’s only so far away we can get.

Though some of the performances were solid, a lot of the delivery felt like gesture without motivation, demonstration without understanding.  Considering the cast consisted of the 3rd year graduating actors, some of the weak enunciation and ineffectiveness at conveying text were actually rather shocking.  I’m not sure hanging back from Shakespeare with an ironic malaise, especially with young actors, can work all that well.  The language is too rich and demanding to be so blithely delivered.  That said, Shannon Currie, in the role of Olivia, as she was in last semester’s production of Three Sisters, is clear, commanding and a treat to watch.

As I left the theatre, I overheard an older gentleman, clearly frustrated by the lack of discipline in the performance, say to someone “if you can’t speak, you should probably work in a restaurant or something.”  I don’t think he meant anything against restaurant employees.  But come to think of it, it did feel a bit like watching Twelfth Night as performed by bored barristas.  And if that was the idea, well… Mr. Creosote!

Twelfth Night continues until March 2
Posted by THE CHARLEBOIS POST at 5:04 PM