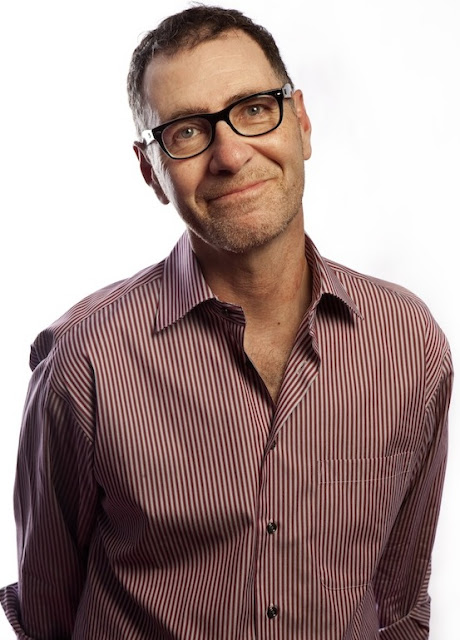 for non-theatre people...It’s a play about life.
by Christian Baines

A Canadian original about the power of theatre to change a life, Michel Nadeau’s And Slowly Beauty... opens this week at Tarragon Theatre. We caught up with Director Michael Shamata ahead of the show’s Toronto debut.

CHARPO: So, tell us a little bit about And Slowly Beauty... How would you describe the show?

SHAMATA:  It’s basically about a man in middle age who goes to see a production of Chekhov’s Three Sisters, and as a result starts to re-examine his life.

SHAMATA:  In various ways. Different themes and speeches from the play start to resonate for him and in some instances it takes him down a dark path, and eventually it makes him become aware of the beauty of life that he already has.

CHARPO: What drew you to the show in particular?

SHAMATA: I guess two things. One, I just love that it’s essentially saying that art can change our lives. That’s a great theme to come across when you’re working in theatre. And secondly, on a more profound level, the sense within the play, that life has its ups and downs. We all encounter difficulties and challenges, but ultimately there is beauty in the world around us if we take the time to see it and appreciate it.

CHARPO: The protagonist ‘Mr Mann’ is kind of an everyman discovering theatre’s potential power for the first time. For whom would you say the play is written?

SHAMATA:  It probably speaks to people... I don’t want to say middle age, because that seems narrow. But certainly people who’ve had some life experience will look at it in one way. Younger people will see it as a positive idea to carry forward as they proceed in life. So I wouldn’t eliminate younger audiences. I think it’s eye opening for anybody. Certainly a middle aged audience may ask themselves the question ‘Would I change my life if I had the opportunity to do that?’ which is one of the questions that the play poses. For young people, I think it reads as being very much about our choices in life, and the life one builds based on what those choices are.

CHARPO: I guess another side to that, given that it is so dependent on Chekhov’s Three Sisters, is where does it stand in terms of appealing to a regular theatre audience as opposed to those occasional theatre-goers in the audience?

SHAMATA: Let’s just say you don’t have to come into the theatre familiar with The Three Sisters. There’s enough of it in the play for that to all make sense. It certainly doesn’t eliminate anyone that way. I think anybody who has seen The Three Sisters will have a slightly different experience of the play, but it’s certainly not about The Three Sisters. Anything that he responds to in The Three Sisters is heard and seen on stage. What’s kind of fun, if anyone is familiar with Chekhov, is that And Slowly Beauty... plays a bit with some of the criticisms of Chekhov, being that ‘nothing happens,’ and that people are always complaining about things but never doing anything about it. All of that is kind of played with.

CHARPO: The work is described very much as a love letter to art. How do you go about reaching those ‘Mr Mann’s' in your audience, particularly in a work like this that’s so focused on how theatre, as an art form, touches people?

SHAMATA: It’s their play. They love it. They respond really, really positively to it. The play itself is totally made for those people – for non-theatre people. It’s a play about life. It’s a play about the choices that we make and the fact that we can make choices and the fact that we can change the life that we have and can also learn to appreciate it even more. But it’s definitely a play for the masses and the Mr and Mrs Manns’ in the audience.

CHARPO: Can you recall a time when either yourself, or perhaps an audience member had an experience like that? Did this play remind you of any particular instance?

SHAMATA: I can’t at the moment, think of any one in particular. I will say, consistently, when we were playing at the Belfry that the play often had the same effect as The Three Sisters does within it. And Slowly Beauty... itself causes people to re-examine their lives and to ask themselves if they could make different choices, would they? If they were given an opportunity to change their lives, what would they change, and would they change it? So in effect, to answer your question, yes I was aware of stories like that every time I was in the lobby of the Belfry while the show was playing. But other shows, I don’t know that I can think of a particular time when someone said ‘that play changed my life,’ though I do know I’ve heard people say that.