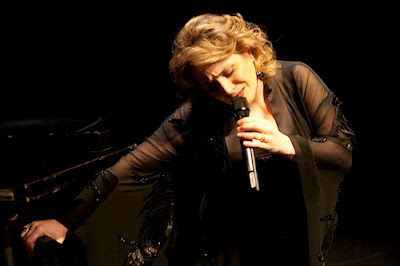 Patricia Racette: Diva on Detour is a fun album of the standards done by one of the best American opera stars. Set in a cabaret environment, this record is like spending an afternoon with a talented singer who has taken a detour from Opera to pursue another one of her passions, vocal jazz.

Her very personal transitions from one song to the next make for an intimate setting: this could be a recording from a lounge bar of a nice hotel in Syracuse, New York. Ms. Racette introduces the songs with stories and biographical anecdotes  to create an intimate and casual atmosphere with the live audience. For example,  she describes how her mother, Jackie, wanted her to pursue opportunities with popular music instead of a career in opera and could not understand why “Pattie” was not singing every song with her “chest voice”.


Musically it is not a challenge. Ms. Racette is accompanied by Craig Terry who fights her for control of the tempo and Patricia wins this fight but the result at times, specifically her Edith Piaf Medley, becomes bogged down. At the same time her soul and delivery of the lyrics during the Edith Piaf Medley is tangible and exposed while her English songs seem more restrained. As she explains it though, it may be because her soul is more French than English.  However, this is not meant to be a serious study of musical classics this is a fun rendition of the standards and listened to from this perspective it is a success.

Personal favorites are The Man That Got Away and To Keep My Love Alive They are both about lost loves but while the former is a sad and depressing realization of failure dripping with despair, the latter speaks of murder with comedic disdain, with its take on a black widow who lists every one of the deceased husbands she successfully “bumped off”.

If you are looking for a new exploration of music then this will not be your cup of tea. However, if you are a fan of Patricia Racette who craves more information on this accomplished performer or someone who enjoys a fun rendition of the standards from a cabaret setting this is your CD.
Posted by THE CHARLEBOIS POST at 12:03 AM