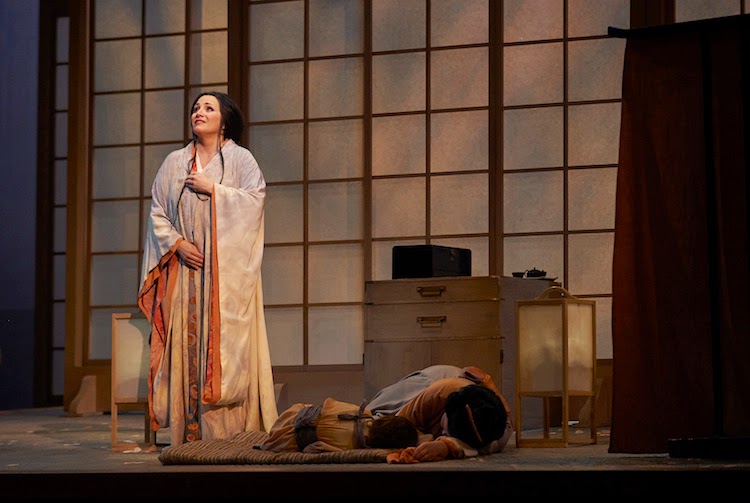 Have you ever been used?  Perhaps you are a trusting person who took someone at their word and paid the price.  Maybe at this very moment you are alone in your apartment taking care of some plants you don’t even like for fear that they may die while their chief caregiver and your wife/husband/partner is away. Then maybe they don’t return. Well if you have been in that position Madama Butterfly is for you.  If you have not been in that position then Madama Butterfly serves as an excellent reason why you never want to be.

Madama Butterfly is about a jerk of an American officer, played with dripping contempt and cowardice by Stefano Secco, who simply wants to get laid by a child bride and goes through a meaningless ceremony to do so. However, for his naïve bride, Madama Butterfly, played with guileless sincerity by Patricia Racette (for the performance I saw), it is an actual ceremony that she willingly rejects her family and friends for. It would be great to tell you that they live happily ever after but this is an Italian opera and you should know better.

In essence it is a simple plot with the lesson being do not put all your eggs in one basket. Yet it is not the plot that has made this a successful work for 110 years, it is the music and in particular the performance of Madama Butterfly. Ms Racette certainly delivers a large dollop of disdain and despair for her fellow Americans. Playing the dutiful wife while everyone knows she has been duped, she corrects others who insist on calling her Madama Butterfly when it should be Mrs Pinkerton. She does this despite the fact that she essentially had one night with a man three years ago and has not heard from him since.

It is hard to communicate this in the simple dimension of the written word but it is not the plot that compels you to watch this.  No. This is a tragedy and like all tragedies, whether it be a plane flying into a building that has people you know inside or someone falling to their death from a tightrope, you can’t take your eyes off it. What sets this tragedy apart is the quality of the voice of whoever plays Madama Butterfly. For this the COC has been graced with Ms Racette whose soprano arias pull you into this tragic state. She knows it, we know it, and her voice showers the shame of this knowledge on us like the echoes of a crime being committed that we cannot report. For instance, in the final scene when the reality of her situation presents her with some hard choices, her duet with her maid Suzuki, played brilliantly by Elizabeth DeShong, is amongst the most powerful pieces I have ever listened to.

This is a piece of despair between the patron and Puccini. For example, there is one five minute segment where the audience simply watches Madama Butterfly and her entourage wordlessly waiting as evening passes into night and finally into morning without a word but accompanied by the beautiful melody that conductor Patrick Lange painfully drags us through. Painfully because we know that Madama Butterfly has been had and that her husband has simply used her. Yet we are forced to watch her patiently wait listening to the sounds of the night innocently pass as she abides.

If this was not my first time seeing this I might be critical of how closely it resembles the original piece. Puccini or anyone else with a high school education would prefer to have placed this piece not in the Nagasaki post Commodore Perry’s opening of Japan to the West under the guns of his white fleet. But, instead in post WWII Nagasaki, a city that had just been utterly annihilated by the second and last nuclear blast over a civilian populace.

It is insane however, how accurately this piece captures the essence of the Japanese both then and now as well as the Americans and their shrewd ability to wiggle out of contracts. In the first scene when Benjamin Franklin Pinkerton (Stefano Secco) plans to get married he openly boasts about how easy it is to get out of a Japanese marriage by simply declaring that he is divorced. For his wife she is honour-bound to this American and has committed body and soul by converting to his religion and adopting, as best she knows how, an American lifestyle, and takes pride in the fact that American men cannot simply declare they are divorced. These are astute observations, and though broad and with obvious exceptions, there is still some truth to both of them even a little over a century later.

It is difficult to restrain the praise I have for this piece. If you are depressed and looking for something to cheer you up I suggest you see Falstaff but if you would like to witness the female voice beautifully stretched to its limits and accompanied by a wonderful supporting cast and orchestra then go to this show or better yet go to both.