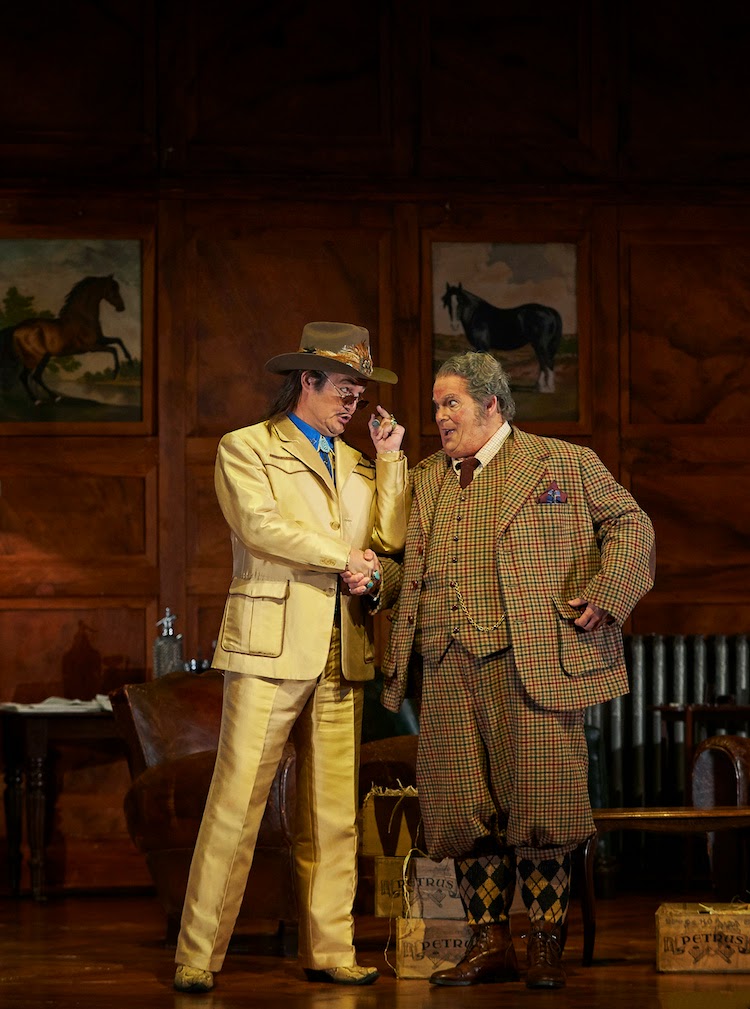 According to Webster’s Dictionary an “appetizer is a small dish of food meant to stimulate your appetite”. If Falstaff is the appetizer then Toronto is in for a spectacular season at the Canadian Opera Company. Falstaff, Verdi’s last masterpiece, is a light show done with ribald humour, superb performances and amazing sets.


The work itself is Verdi’s combination of William Shakespeare’s most interesting character from Henry IV, Falstaff and The Merry Wives of Windsor.  Here Falstaff, played superbly by Gerald Finley, as a former aristocrat who openly spurns honour and embraces any means necessary to maintain his lifestyle sets on an ill-inspired quest to seduce the wives of two nouveau riche citizens with nothing but his traditional charm and massive girth. The purpose of his quest is to fatten his purse so that he can maintain his lifestyle and vast consumption of wine, women, and fun. Of course he fails miserably and that is the joy of the play.

Mr. Finley succeeds in continuously making us laugh at the fat man and his ridiculous pride. At one point while, in his mind, he is about to conclude the seduction of his conquest, Alice Ford, played by Lyne Fortin, he discovers that his other conquest, Meg Page, played by Lauren Segal, is on her way to join him. However, instead of retreating he simply suggests that the women take one massive joint, while gesturing to each of his legs, each.

What makes all of this work is Mr. Finley’s facial expressions. He is not over the top and he is not going for cheap laughs. Instead he is the ridiculous portrait of the traditional man with his virility being handled and abused by some modern women. Mr. Finley is not the object we are laughing at instead it is the archaic values of the 19th century being brought out by Falstaff.  These values are of a man of his stature and class but especially his size who has no problem seducing any woman and especially provincial, or nouveau riche, ladies like the two he has set his sights on. What Mr. Finley and director Robert Carsen do is successfully show, in true Italian fashion, that it is the women who are running things. Through his facial pride, voice intonations, and earnestness Mr Finley brings this hopeless man and his fruitless efforts to comedic perfection.

His counterpart, played by Marie-Nicole Lemieux, was Mistress Quickly, the willing agent for his two romantic conquests but who also means to lead him down the path to open ridicule.  If we are drawn to Mr Finley because of his facial expressions then we are drawn to Ms Lemieux because of her physical acting skills.  Ms Lemieux provokes our laughter by jutting out her leg and shaking it with poise as one form of introduction to the all male club. She then continues to corral our curiosity by removing her coat, striptease style, in this 19th century gentleman’s club only to show that her curves are covered by a green floral dress with budding pink flowers. Ms Lemieux is simply a delight to watch and to listen to, as she leads this bull of a man to slaughter.

These performances are beautifully supported by the orchestra, as conducted by Johannes Debus.

From a hotel room decorated with bottles to the final scene of a dinner after a fox hunt, the set of Paul Steinberg made the audience gasp with enjoyment. Of particular interest is the 1950’s kitchen of Mrs. Ford. This was a feast for the eyes in both form and colour and watching a 19th century troglodyte storm through it provided soul stirring laughter. Choosing to have this set in post war England under Elizabeth II – and not Elizabeth I as both Verdi and Shakespeare originally intended – provides the audience with a personal connection while reinforcing the notion that the more things change the more they stay the same.

This is a superb piece as envisioned by Director Robert Carsen and made up entirely of a Canadian cast: the production and all the cast were absolutely flawless. With an appetizer like Falstaff, this season should be a feast. However, if you don’t want to miss the starters, get there as soon as possible.