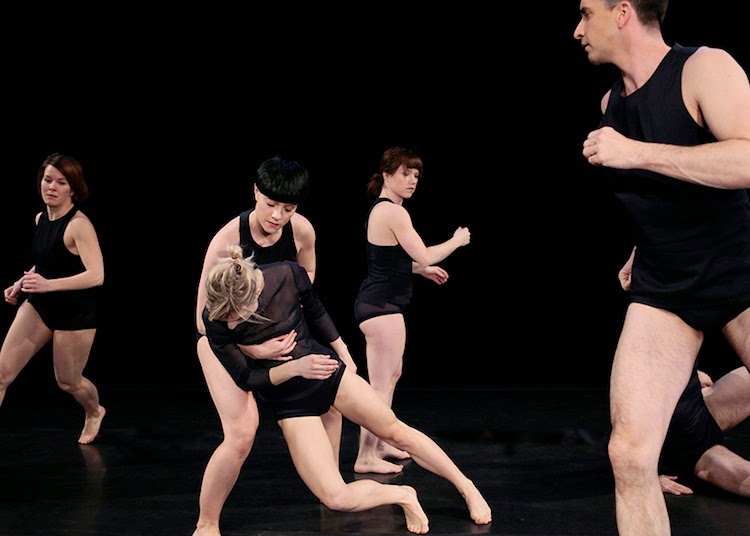 The Art of Wanting
by Aleksandra Koplik, Senior Contributor

In honour of O Vertigo's thirtieth anniversary, one of Quebec's leading contemporary dance pioneers, Ginette Laurin, creates Soif. She brings to the stage eight phenomenal dancers: Audrey Bergeron, Sophie Breton, Charles Cardin-Bourbeau, Caroline Laurin-Beaucage, Louis-Élyan Martin, Robert Meilleur, James Phillips and Stéphanie Tremblay Abubo. Wearing nothing or black, they deliver the message of what wanting may look like. "Soif", meaning thirst in French, is what is performed on stage. The thirst for sex, affection, touch, dreams, liberty - the interpretation is in the eye of the beholder. Most of the scenes are coupled and performed in two's, which gives the body interaction more meaning and sort of mixes things up on stage, as the movements are not unanimous.


The absence of music or the sound effects by John Cage and Michel F. Côté give the room a rather realistic feeling of being in a cold, possibly metallic basement with a leaking ceiling. With quiet whispers, irregular beats and incomprehensible sounds, one feels the restraint of the environment like in a prison, or a worn down hospital. Though this performance clearly isn't created for the purpose of entertainment or the 'wow' factor, its intentions are to make the audience feel. The lighting was absolutely brilliant. The smoky stage, mixed with a variety of effects made the atmosphere go from underground cabaret, to warm sunset, to electric dance floor. Martin Labrecque creates a wonderful visual scheme that is ever-changing during the performance.

Short and powerful, it may evoke a positive reaction just as easily as it would a negative one.