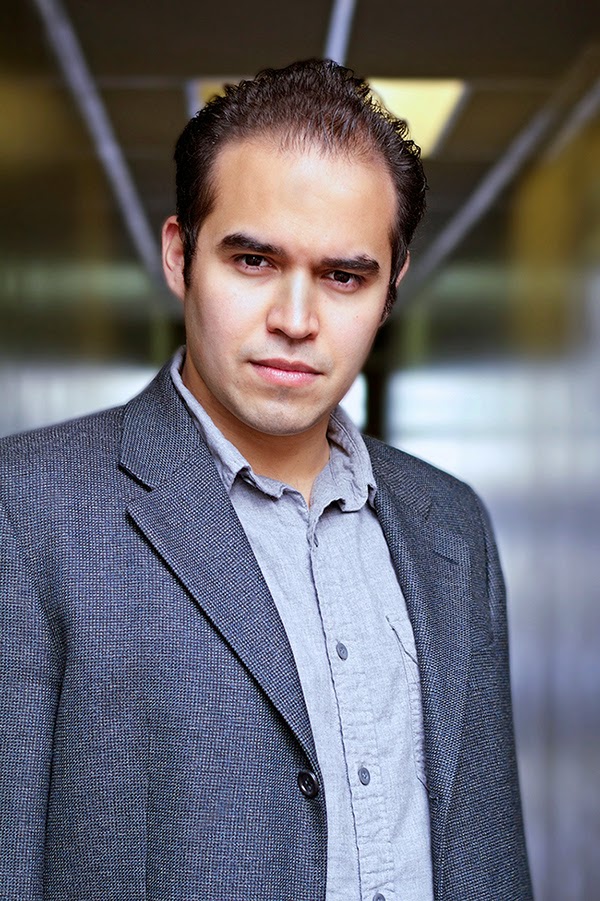 Mexican-born actor, singer and director Sergio Augusto Flores trained at Methodica Acting Studio in acting and direction and graduated from Capilano University for music. As an acclaimed operatic tenor, he is a protégé of internationally renowned soprano Heidi Klassen and has performed to great critical acclaim throughout his home province of British Columbia and across Italy, Germany, Austria and the Czech Republic. His recent appearances include a highly successful self-produced concert with the Bowen Island Classical Concert Series; an English Arias concert with Opera Mariposa, where he was "a clear highlight of the evening" (The Vancouver Project); and Mozart’s Requiem with Capilano University, where he was "full of vigor, charisma, and infectious enthusiasm" (The Vancouver Observer). He is delighted to make his operatic direction debut this October with Suor Angelica, and he is also hard at work crafting a concert of Latin music for tenor, baritone, guitar and percussion. He is set to tour the Lower Mainland this December singing the role of The Gingerbread Witch in Opera Mariposa’s winter opera Hansel and Gretel.

This October, I will have the pleasure of directing Puccini's Suor Angelica with Opera Mariposa, a Vancouver company of emerging artists. I will also have the wonderful privilege of re-imagining the opera, creating a new vision and interpretation of what Puccini considered his finest score.

The broad strokes of the most important changes were clear to me as I saw and heard the opera for the first time. I was entranced by Puccini's music every step of the way. Throughout the opera, I felt like the music was leading me towards what would happen next. Often I found myself holding my breath, hoping that the next lines would not disturb the scenes that fell into place so neatly in my mind. They never did, and it was a strangely satisfying feeling. There were silences where I needed them to be, and Puccini's sensitive changes led me to what I feel are the themes of the opera: the themes of love, forgiveness, and victory over death.


From giving up her child to reaching her ultimate fate, she is portrayed as little more than an archaic stereotype: passive, weak, and without agency.

As much as I immediately connected to the music, I found myself terribly at odds with the stage direction choices I saw. We are all familiar with the broad outline of the story: Sister Angelica has been at a convent for seven years without word from her family. When she finally receives a visit, she is told that the illegitimate child she bore died two years ago. Overcome by grief, she drinks poison, only to realize that the mortal sin of suicide will damn her forever. She prays for redemption, and a miracle allows her to reunite with her son in Heaven.

In most productions, the character of Angelica is depicted as a tragic and pitiable figure: a woman defeated by life, a woman who ends up poisoned and crawling on the floor, victimized to the last moment she draws breath. Even her suicide is not an act of self-determination, but an action she takes without awareness of the consequences. From giving up her child to reaching her ultimate fate, she is portrayed as little more than an archaic stereotype: passive, weak, and without agency.

Ultimately, I feel that the traditionalist staging is not suited to realizing the potential of Puccini's score. It is permeated with the limitations and taboos of its time, and doesn't do justice to the emotional possibilities of the opera.  I believe that there are three crucial points that need to be emphasized, and that audiences today are ready to explore them.

The first issue that must be addressed is the first half of the opera. This section depicts the everyday life of the convent sisters, and in most productions it is portrayed as peaceful, placid, and frankly somewhat inconsequential. But Puccini does not compose musique d'ameublement; his score is not trivial, and neither is life, whether in a cloistered convent or in the midst of the modern world.

Even if, for the sake of argument, most days at a convent are tranquil, any day worthy of the stage is not like any other day on earth. Our sorelle are not allowed to be boring simply because they are fictional. It is jarring and ill-paced to dive into Angelica's tragedy halfway through a 55-minute opera after half of it passes by with no struggle. It trivializes the tragic revelation, and makes the events that unfold afterwards artificial and hysterical. Every nun is suffering, because every nun is alive, and everyone alive must work hard each day to live their life with dignity. That is why I have chosen to set our Suor Angelica during the Second World War: no other setting could highlight more vividly the fact that no matter how you try to retreat from the world, chaos and struggle are an intrinsic part of human life.

The second issue is a sensitive matter. It points out Angelica's responsibility for her own choices. When I first raised this issue, it was quite a matter of debate amongst my colleagues, but I feel it's important that Angelica chose to leave her son behind. Yes, she was subject to familial and societal pressures, but ultimately she was the one who left her child in the care of a household where the priorities were concealing life, not nurturing it.

I have chosen to give weight to this point in our production, because I believe that we live in a world of choices. Let's imagine that we are in the room the day that Angelica's son was born. What could have stopped Angelica from staying with her son? Her family, or the physical stress of giving birth? Yes, of course those are possibilities. Say Angelica's son was being taken away, then – could she have crawled after him? Others could have stopped her from reaching him, but the only thing that could stop Angelica from trying was herself. The only thing that could have truly stopped Angelica was death, but she chose to live. If she had kept trying, this would be a different opera: an opera about a mother's tragic and unrelenting quest to find her son. She entrusted her son to liars, for the sake of comfort and in the hopes that she could perhaps one day see him again. But she never will in this world.

The music Puccini writes for Angelica's finale is that of a heroine and a victor.

This leads us into the third issue of Suor Angelica: the miracle. If Angelica was willing to choose death to escape her pain, she would have chosen it seven years prior. Once seven years of futility settle heavy on her heart, Angelica's decision is not to choose death, but to choose to join her son. Therefore, the story of Suor Angelica cannot end at her death. The music Puccini writes for Angelica's finale is that of a heroine and a victor. He reveals her as perhaps the strongest woman in opera, because once she finally makes her decision to be with her son, not even death can stop her. She leaves the fighting, the shame, the blame and the guilt behind, and Angelica is free.

I'm very grateful to be working on such a beautiful project with so many talented artists. I've been allowed full artistic license and I've encountered nothing but cooperation and the willingness to take risks. I believe our production will be successful on this merit alone. When joined with two casts of incredible performers – among them an award-winner from the Metropolitan Opera National Council auditions, a national finalist from the Canadian Music Competition and several amazing artists from Vancouver Opera – I feel like we cannot go wrong. The music, the story, and the wonderful character of Suor Angelica call for a victory, and by God, we'll give it to her.