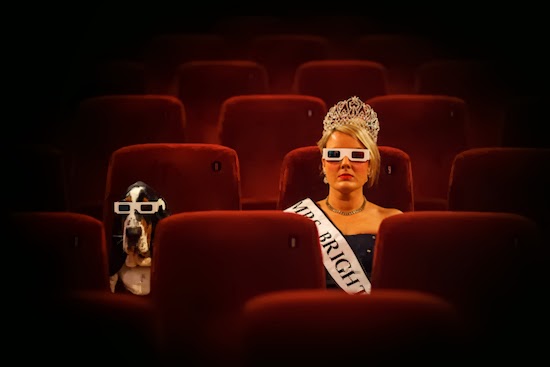 (credit: Liquid Photo)
A (Show) Dog's Life
Victoria Melody’s one-woman dog show never quite leaves ground control.
by Christian Baines
@XtianBaines
There’s an eerie foreshadowing when Victoria Melody starts telling us of the numerous Z-list British celebrities that her dog, Major Tom has charmed on his daily walks. Could Melody be giving us a glimpse of what she would eventually become? That’s certainly the question lurking at the back of Major Tom, the 70 minute monologue Melody delivers based on her experience, first on the UK dog show circuit, then as a mature age beauty queen herself.
Melody imbues her story with a delightful everywoman-out-of-her-depth quality. It’s endearing in no small thanks to her resilience in the face of repeated failure. The biggest applause is naturally reserved for the eponymous pooch, an adorable basset hound guaranteed to earn his share of laughs and awwws from the audience.


Major Tom rests on its gimmick for much of its opening, which effectively puts Melody on the same footing as her audience. She’s awkward, but down to earth and sincere, genuinely and obviously an animal lover. What follows is something of a less polished Miranda Hart-style recollection of Major Tom’s journey from oversized puppy to show dog. Some of the stories land more effectively and earn a bigger laugh than others. But when Melody decides to enter the pageant circuit herself, Major Tom turns its attention to more serious questions of idealised beauty and objectification.
“You are not on show,” she is told by one breeder at a dog event. So Melody gives us a glimpse of her experience being exactly that, mingled with tales of her dog’s journey.
This is where Major Tom is probably a stronger academic exercise than it is a show. The narrative becomes quite muddled at this point and the laughs evaporate into polite chuckles. We see Melody go to extraordinary lengths to become a pageant queen, but are there really any parallels between that and the life of her dog? Or maybe the point is the dog’s apathy toward the whole thing. Whereas Melody, by her own admission has changed into something she didn’t necessarily want, but is enjoying anyway.
That ambiguity leaves us almost as apathetic as the Major about the whole business. It probably doesn’t help that the show relies more and more on video footage of Melody and the Major’s respective contests as it goes on, rather than original storytelling. The costume changes serve little purpose and break the flow (as well as leaving Major to roam the stage at will). The end result is a single gimmick show. There’s enough charm to put a faint smile on our faces for its duration, but the potential in its themes remains largely untapped.


Major Tom runs until Saturday, March 1 at Harbourfront Centre.
Posted by THE CHARLEBOIS POST at 7:17 PM