Review: (Ottawa) This is War 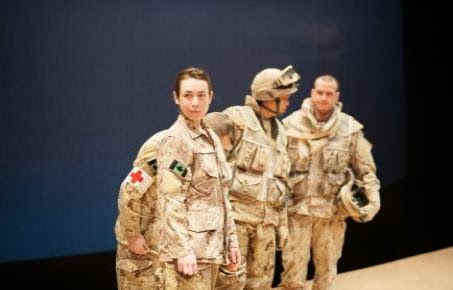 This Is War
And War Is Hell
by Jim Murchison

Eric Coates designed a season with the theme "fearless" and this is perhaps the most fearless play so far. The subject of Canadian troops in Afghanistan and the effects of Post Traumatic Stress Disorder is a tough one to tackle. I don't want to get into the specifics of the story but sexual tension, Gays and women in the military, battle fatigue, insomnia  and just war itself are all explored. In a civilian office an affair or a bad decision can be awkward or career ending. In a war zone a bad decision can maim or kill you or the people that you work with.


Brian Smith’s set is very simple: an elevated platform with a sandy coloured floor, the upstage left corner curling up slightly hinting at a wisp of a dune. Three drab green crates lay upon the stage. Smith also designed the costumes that show a unit ready for battle. The rest of the atmosphere is provided by the actors, Steven Lafond’s sound and Jock Munro’s lighting. The design elements work incredibly well together, particularly in a scene where a helicopter is lifting casualties and the lights are shining brightly, the blades of the chopper can be heard chattering above and a cloud of desert sand swirling below. In another scene Munro’s lighting illuminates a box at the soldiers’ feet planted firmly on the ground and light on their faces but the bodies of the actors are in black creating an image of separation that hauntingly connects you with the text.
Playwright Hannah Moscovitch puts the audience instantly in the role of interrogator investigating the incidents that occurred on a battlefield in Afghanistan. It is both engaging and just unnerving enough to force us to concentrate.
Director Eric Coates moves some terrific actors through their paces with military precision where required and with humanity and heart as well.
Drew Moore as Private Jonny Henderson is the most naïve and vulnerable of the four characters. He is also a love struck boy just off the farm infatuated with Master Corporal Tanya Young.
Young is played by Sarah Finn, an actress well known to regular Ottawa theatre goers for wonderful portrayals. She plays Young with all her heart and soul delivering another stellar performance. You feel every moment with her.
John Ng as Sergeant Stephen Hughes appears to be totally in command until he lets the cracks show and the stress and responsibility of command erodes his common sense. Again he hits the right balance.
Sergeant Chris Anders played by Brad Long is portrayed with warmth, charm and honesty. As the medic he is the person that is the most dependable and most willing to help; as long as you don’t tell him too much. Long gives him just the tiniest crack to show that no one is safe from the mental turmoil that faces you in a battle zone.
The play effectively uses repeated flashbacks to war zone to expose the characters’ inner turmoil of their experience. Sometimes this is a device that explains something different or shows a different point of view. In This Is War the repetition serves to cut into the wounds of war deeper and bring out the anguish and pain of nightmares.
This is not theatre where you only half pay attention or that fills a need for distraction. Moscovitch is not trying to lead us into any decision as to whether it was right or wrong to be in the war. She flips the human element of battle on its back and exposes the underbelly of the physical and emotional toll of war without judging it. It just stays with you.
Feb. 4  - 23
runtime: approximately 90 minutes with no intermission.
Posted by THE CHARLEBOIS POST at 5:30 PM