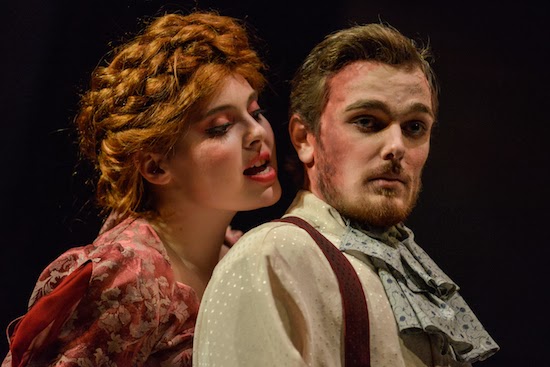 The graduating classes of the National Theatre School of Canada bring us The Changeling, a dark and twisted romantic story filled with castles, murders, asylums, blackmail and dirty, dirty premarital sex. Director David Latham takes the original text written by Thomas Middleton and William Rowley and gives it a contemporary feel.  Since many of the actors are playing two different characters, it can sometimes be hard to follow, but to break it down; it’s a showdown of two love triangles.
The main character, at first very lovely and Juliet-esque, Beatrice (Megn Walker), is engaged to Alonzo de Piracquo (Stephen Tracey), but is in love with Alsemero (James Daly). So, she uses De Flores (Benjamin Wheelwright), who’s basically her stalker and mother’s servant, to murder Alonzo and in return ends up being blackmailed into giving her virginity to him.


Then there’s Isabella (Erica Anderson), who’s basically under house arrest because her husband, the master of the asylum, Dr Alibius (Alexander De Jordy) is an old and jealous man. She falls for a madman in confinement, Tony (Andrew Chown), when he reveals that he is not so mad after all.

In this very long and wordy tragedy, the changes in costume were very welcomed and appreciated. It was an attractive combination between military chic and summer pastels that were easy on the eye and interesting to observe. The stage design was visually brilliant, with the mirrors and glass windows giving a real feel for the insanity on the stage, however, it took away from the sound being carried into the audience, numbing the volume down substantially. The actors did a very good job keeping up with the energy on stage. Benjamin Wheelwright shined that night. His ability to play the manipulative creeper that you sort of love in the end was outstanding and his performance great. Another actor with an incredible stage presence, raw sexual energy and charisma would be Wayne Burns, who played Alibius’s servant, Lollio. I did not love our Beatrice, she was supposed to be the girl that embraces her dark side, cool, calm and following a plan. Walker portrayed her as a dishevelled and aggressive maiden.

Overall, an interesting production, that could have used more dancing and singing motifs (very well done), just to break apart from the tragedy a little and highlight the darker or even brighter parts of the play.