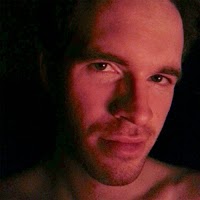 Kevin P. Gabel writes and performs the role of Julian in Undress Me, and he has obviously put in a lot of work getting to the emotional core of the character around which this show revolves, but the coherence of its plot suffers for it.

The play is framed as a conversation between Julian and Beth, the woman on the verge of marrying his brother, but it's unclear why he's telling her certain things, giving a lot of 'as you know' exposition about events she took part in or witnessed. The most intriguing part of the programme writeup for me (and a lot of other people, I imagine) is Julian's job as a webcam performer, but the play barely gets into how that affects Julian's life or what motivated him to pursue that living--especially since he's doing it with his laptop alone, implying he doesn't take it seriously enough to invest in a separate camera or any other equipment.


A powerful enough monologue can distract an audience from looking for logical inconsistencies, but the direction by Ivan Henwood was too static to keep me from pondering these and other unanswered questions. Gabel has an appealing stage presence which suggests a darker Neil Patrick Harris quality, so I hope he keeps playing to those strengths while also taking a step back to look at the bigger picture in future efforts.