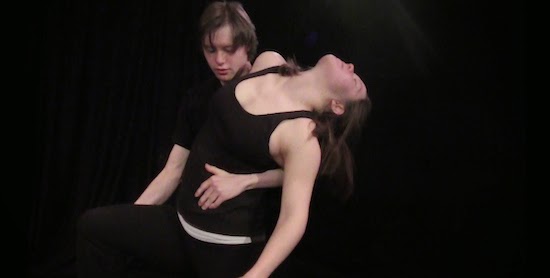 (photo by Biserka Livaja)
Howl at This
by Jason Booker

[This review has been corrected - Ed]

Wolf Sounds: howling, sign of territory, pack behaviour, isolation, identity and independence. All these themes briefly come to light in a new piece that mixes Down Syndrome and dance.
Two main threads emerge through Wolf Sounds from a series of short scenes – some more musical, some with dialogue combined with a handful of spontaneous or freeform dances and a few others intricately choreographed by the company of five, led by director Brooke Banning.


An innocent girl in a white dress (Nicole Flynn) (Lindsey Chalmers) looks for ways to fit in, the right company to keep, but always is abandoned –occasionally by choice. She meets a young man (Victor Pereira) who longs for connection but doesn’t know how to properly make it with her. Regardless of her needs and demands, he perseveres through his desire. A warning: this tale ends in a shocking fashion involving guns, blood and assault that this reviewer felt rather disturbed by and felt that the show didn’t adequately prepare an audience for nor appropriately deal with in its narrative.
The other storyline follows a young lady (Amelia McAfee-Brunner) searching for her own identity. Much of her storyline involves the line between femininity and sexuality – including an amusing lesson in how to walk in high heels from Nicole Flynn Lindsey Chalmers  and a makeup application from Dylan Harman in drag. The very relevant subjects for these performers of conformity and appearance become blurred with the distorted beauty of transparent clown masks or the suit-and-tie strip routine. Even an abstract moment with lipstick takes on disturbingly beautiful connotations.
Bravely the cast tackles issues regarding their day-to-day lives and strongly executes their movements through the space. The taboos surrounding image, expressing desire and representation are important for audiences and necessary for these performers. Why don’t we have these discussions more often, even if they do leave an audience feeling uncomfortable?
Unfortunately, for opening night, the ending felt tentative and the cast lacked confidence with some of the lyrics they sang. However their charisma carried them through the performance.
Sensitively and symbolically staged in a small space, the number of innovative tricks (including one of the best onstage disappearances without traps below deck I have witnessed) employed to challenge the performers and the audience is astounding for a one hour show. Wolf Sounds is all about the spectacle, but it maintains an emotional core that gets bruised a little and may not know what it wants to say but needs to be heard on a larger scale.
July 18 - 27
Posted by THE CHARLEBOIS POST at 5:15 PM