Review: (Winnipeg) One Man Back To The Future (Fringe) 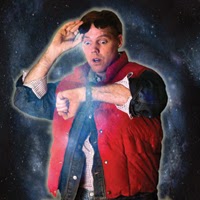 Where We're Going, We Don't Need Roads
When this baby hits 88 miles per hour...
by Edgar Governo
@pseudohistorian

Back to the Future is my favourite movie.

As such, I could've been a really tough crowd for Shelby Bond's latest show as it premieres at the Winnipeg Fringe Festival. I know the residents of Hill Valley like it's my hometown, and I have to resist the urge to include endless trivia (Eric Stoltz was the original Marty McFly!) in this review. It's possible I could recite the entire film from memory if I tried, so when Bond took up the challenge of adapting the words of Robert Zemeckis and Bob Gale for the stage, it was people like me he'd have to worry about most.


Bond seems to be aware that I'm not alone--when he asked the audience at the top of the show if anyone there had never watched the movie, only one nine-year-old girl had failed to see the biggest box office hit of 1985. This sort of performance is really meant specifically for people who've seen Back to the Future already and can spot how well (or not) moments from it are recreated.

Those who have a long memory for past Fringe shows are also likely to compare this to the One Man Star Wars Trilogy, written by Charlie Ross and directed by Fringe legend TJ Dawe. Bond isn't nearly as concerned with creating a seamless adaptation--not only is he more whimsical in his approach, incorporating moments of audience participation (such as casting an audience member as Principal Strickland to yell out, "You're a slacker, McFly!") and not worrying about the fourth wall, but Ross and Dawe also had the advantage of a whole unseen process of refinement.

By contrast, we're watching Bond learn what works and what doesn't as he performs it. There were a number of technical issues at the performance I attended (most notably the failure of his microphone early on), but he is experienced enough to take a missed sound cue or a prop sign falling off its handle and make that seem like just part of the fun.

The impressions of the film's characters are a mixed bag, as you might expect. Bond is uncanny in recreating Crispin Glover's George McFly, and manages to evoke Michael J. Fox as Marty, Christopher Lloyd as Doc Brown, and Thomas F. Wilson as Biff Tannen, but also portrays Jennifer Parker as "an Australian stereotype." Despite some odder choices, though (a ukulele also makes a key appearance), he bring the sensibility of the movie to life enough that I can almost see the DeLorean onstage with him.

The flux capacitor is what makes time travel possible, but Shelby Bond is what makes a successful One Man Back to the Future possible for this initially sceptical fan.

Email ThisBlogThis!Share to TwitterShare to FacebookShare to Pinterest
Labels: edgar governo, fringe, one man back to the future, theatre, winnioeg