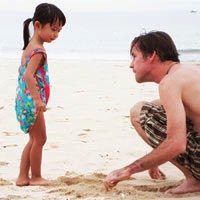 For all that The Surprise (as the title suggests) concerns itself with how to confront something astonishing when it comes at you out of left field, the thing I liked most about Martin Dockery's latest show was its return to familiar territory.

I feel a certain amount of guilt in admitting that. I've been very happy to watch other Fringe performers like Shelby Bond get out of their comfort zone in recent years, but neither of Dockery's efforts to do the same thing in 2013 did anything for me. (I was especially unimpressed by The Pit, his play with Vanessa Quesnelle which I also reviewed on this site.) Hypocritical though it may be, I can't help my personal preference for having him stick to his usual popular storytelling style.


The Surprise shares much in common with The Holy Land Experience, Dockery's offering at the 2012 Winnipeg Fringe Festival--both detail his struggles to make a non-monogamous relationship work in the midst of international travel, and both climax at a well-known tourist destination (Bethlehem in the earlier show, Angkor Wat in this one). While the show's advertising heavily emphasizes the familial revelations in the story, I was most struck by its exploration of the difficulties we sometimes encounter with the people we more freely choose to include in our lives.

Dockery slowly watches his primary relationship fall apart on a trip to Vietnam with his partner. There is no particular reason for it, neither of them has done anything wrong, and they both still care about each other, but they are drifting apart and unable to connect anymore. No easy answers present themselves in his retelling of this--sometimes two people just become incompatible over time, knowing that it's happening and yet unable to go back to the way things were.

Perhaps there's nothing to be done when people move on before they're actually out of our lives, and perhaps my personal preference is just a fear of losing the Martin Dockery of the Fringe that I used to know.