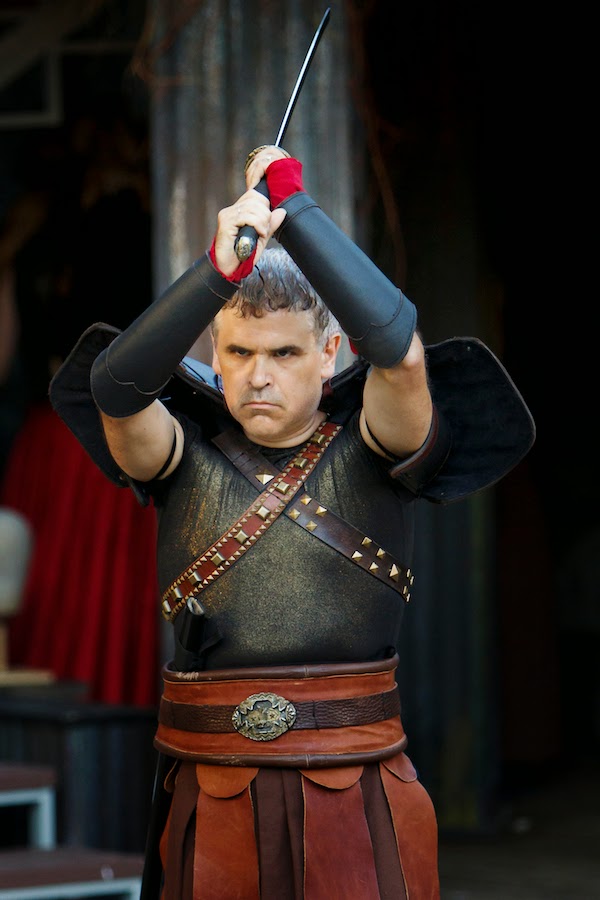 Personally, I think there’s a benefit to exposing family audiences to violent themes in the context of canonical literature. Indeed, insofar as one can put a PG rating on suicide, rape, cannibalism, self-immolation, torture, arguable infanticide, and good old-fashioned murder, I’d say Canadian Stage has done quite well. If the kiddies don’t quite understand the language, then the parents can decide just how much they wish to explain.

Titus Andronicus, written by a temperamental young Billy Shakespeare, is a brutal tragedy that contrasts two wronged families vying for revenge. Director Keira Loughran has styled her production a cautionary tale and seeks to idealize the blood and darkness with flourishes of red and black fabric. She has muddled her setting between imperial Japan, contemporary Japanese pop, and ancient Rome. I wish she had focused on a single theme as the gladiator helmets and the addition of a rock guitar felt anachronistically out of place. The Japanese themes do strongly evoke morality, revenge, and honourable death, which effectively complement the Roman text.


Loughran also played intriguingly with movement. The sons of the Goth Queen Tamora, played by Michael Man and Gwenlyn Cumyn, shivered and slunk sinuously about the stage to great snake-like effect. I also enjoyed a few of the – slightly overdramatic – deaths including the protracted bleeding out of Prince Bassianus, Alexander Plouffe.

Tamora herself, Shauna Black, playing the darkling character of Revenge excelled in her physicality flanked by her similarly seditious offspring. Black also gave a strong and cruelly jilted voice to the deposed queen. Her dress, however, was lost somewhere between the three themes.

Sean Dixon’s Titus started strongly until he began his descent into madness. Titus certainly suffers unimaginable grief but he does manage to keep himself together long enough to exact his revenge. Dixon began losing me as his voice transitioned into that of a Disney villain’s sidekick: a nasal, dull-witted drawl. Far be it for me to say what the kiddies might enjoy but it didn’t work for me.

James Graham played the cause of everyone’s strife, Emperor Saturninus, in a similarly, though far more effective, Disney villain style. His jealousy and insecurities are exposed throughout the play – particularly in the inspired bathtub scene. Graham’s Saturnine is a sniveling, lascivious mess who is easy to hate. One almost cheers at his death.

Cautioning against revenge is a simple but sometimes necessary task. There is certainly a place for BDSM Gore productions of Titus, but there is also a place for the simple and accessible tale of woe and madness. The moral is a little lost and fairly Shakespearean – take your rightful place even if you don’t want it otherwise your family will die? – but the lessons to avoid revenge and respect yourself and your place are important. Watching the madness unfurl while the sky slowly blackens to the tone of the play is also starkly pleasant. Go on, take the kiddies, a little fabric blood and some Shakespeare will build them some character. Might even help you adults a bit too.