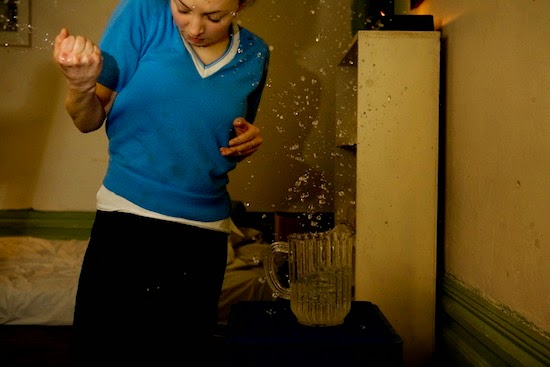 Recall the children’s game, Red Light Green Light, where everyone creeps forward while IT has their back turned? DNA Theatre’s Hillar Liitoja does and has created a five man “radical ballet” around the concept of a game with strict rules.
As demonstrated in the lobby with stage management diagrams of movement, numbered in order, durations denoted with lighting indicated, Red Light Green Light is a series of 24 variations. Seemingly, each variation has been inspired by a concept, word or emotion, like flummoxed, serene, obsessed or secretive.


The five performers stand in five specific pools of light that never go out. This is home base. They sometimes change positions and they are permitted to dance away during a variation, but each of the men has to return as the variation concludes. Every variation commences with a live shot from a starter’s pistol, fired by a judge-like figure sitting at a table in front of the audience.
Rarely do the five performers make contact with each other. One variation involved lifts, another featured a character struggle to be noticed by the others. But typically, each did his own thing – whether it was the soaring jetés of Kealan McLaughlin or the controlled shuffling grid-like movements of Kevin Rees.
Rebecca Picherack’s lighting brilliantly configures the game. When the first six variations finish facing front, almost no extra lighting is added. When the next six variations conclude facing stage right, lighting from the right becomes part of the show. While a string of bare bulbs occasionally reminds the audience which variation has just finished, Picherack conceives of numerous ways to use those lights, from chases to dim glowing patterns.
The infrequent and arbitrary music chosen often appeared to cover up the changing of the pistol rounds and didn’t influence the onstage movement significantly.
The most problematic element of this energetic and exhaustingly well performed piece is that it feels like an exercise, an academic dance meant for the company alone. The audience remains invisible and shut out of the rules of the game that has been created by Liitoja. Instead of projecting what word influenced a variation or allowing the audience to watch a ticking clock for each vignette, the obscured rules and restrictions make the performances become distant and remote, irrelevant to the viewing experience of this athletic and competent but incomprehensible stylistic ballet.
July 18 - 27
Posted by THE CHARLEBOIS POST at 6:36 PM