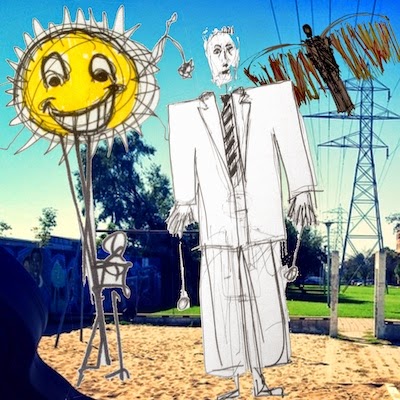 Walking Through The Mirror
by Jason Booker
Small Wooden Shoe, one of the big daddies of indie theatre in Toronto, has a show in the Fringe. Well, outside the normal Fringe venues. Well, outdoors altogether. And they call it a Summer Spectacular, which they hope is the first in a series.
A very casual atmosphere, participants assemble in a the appointed park, given a quick introduction by a man on stilts (Jacob Zimmer, Shoe’s AD) and then divided into smaller groups, each with its own tour guide/storyteller. I say participants since this isn’t really an audience show – we had a neighbourhood kid drop into our group for a while.


The three groups. The three stories. There is a lot of symbolism here. Representative props (including some very neat 3D printed models) appear from the trees or behind bushes. The storytelling has a structure and model, but adapts to the audience present, the narrator each group has, the particular night.
The stories involve mythological Daedalus and the Minotaur, the recent tale of Aaron Swartz, co-founder of Reddit, and a futuristic fable of a government scientist/activist Cassandra. Note the overlapping prophetic symbolism there too as each innovator struggles to exist within the society and systems we have created.
Gently easing the participants through the park, walking and talking in our intimate groups, learning a little song to sing as we move, the show involves a lot of direct storytelling but it is an interesting journey to take. Then we arrive at the beautifully oversized puppets (including Dr. Robert Oppenheimer) to blend issues of surveillance, love, discovery and science.
This isn’t quite a magical evening; the wax and strings and wires are all visible but the weaving of these tales with old-school charm and Brechtian spectacle intrigues this writer to see what the next instalment might have in store. Definitely an experience worth having, for an entire community and not just theatregoers, and one that is best if you're just there and participating.
July 2 - 13
Posted by THE CHARLEBOIS POST at 5:26 PM