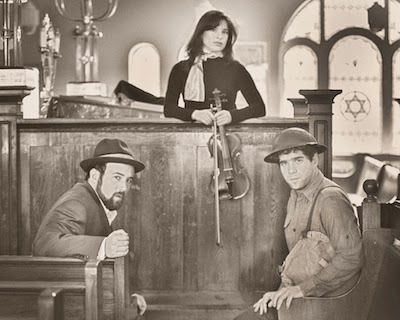 Twisted
by Jason Booker
Staged in and around a synagogue in Kensington Market, A Simple Twist of Faith needs a few more twists. This show, a two person song cycle about a Jewish soldier in WWI Germany who is taken in by a family for Shabbat dinner, and 20 years later repays the kindness, features beautiful voices and a live quartet of musicians.
However, with a plot that is obvious from the outset, the true story’s stakes never seem high enough. Since the story is told as a flashback, the narrator obviously survived the dangers of the wars, hopefully with help from the tale's hero.


The songs themselves are tuneful and appealing, though repetitious. Unfortunately though, the lyrics often stall or state inevitabilities and the dialogue between songs usually repeats the sentiments of the music. As a result, the audience goes through the motions, assuming seats in three locations, but never feeling particularly engaged or challenged, except by the use of microphones in these tiny spaces to be heard over the instruments.
The story rarely becomes about specifics, but instead paints in broad strokes, mentioning that resettling after the war is difficult or that fitting in as a Jewish soldier wasn’t always easy. Most of the history covered in the show is taught before grade ten and many of the Judaic lessons are basic. And the few jokes are very old fashioned: "the great war? I don't know what's so great about it!"
A somewhat minor complaint: moving between the settings is tricky since the show has a large capacity but uses a single-file staircase. Also, an audience wrangler or assistant would ensure that people who need the seats get them and would usher audiences to chairs – when there are enough – quickly and efficiently. Nit-picky but the details are what make a site specific show a success.
Maybe the show is too much of a family affair, written by a trio of Malach men, and featuring one of them as the reminiscing grandfather, Herr Rosenau (Evan Malach). As Alex, the soldier, Adam Jesin handsomely walks through the acting. Nonetheless, the harmonies this duo creates are gorgeous and their hearts and souls pour out into this stunning little setting, a unique urban synagogue.
July 2 - 13
Posted by THE CHARLEBOIS POST at 6:33 PM