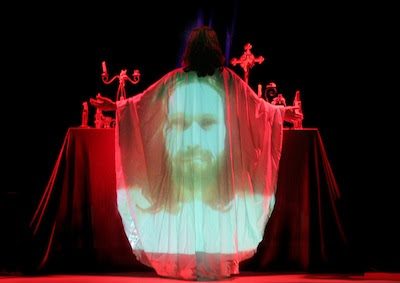 Bigger Than History
Rick Miller's second in his series of solos delivers us from evil
by Adèle Charlebois
Bigger Than Jesus is much more than just your average history lesson on the famed savior of Biblical lore. Rick Miller and Daniel Brooks' Bigger Than Jesus is a playful, thoughtful, sometimes serious and even earnest take on our relationship with religion, God and our ideas of the notion of  ''Savior''. It also offers up an  interesting exercise on how Catholic liturgy has come to permeate everyday western existence.
Miller embodies and encourages the audience to find ''your own personal Jesus''...
Bigger Than Jesus begins with an almost flirty exposition of how ingrained Catholic (or Christian) prayer (or if you will, expression) is in the North American subconscious by literally engaging the audience in an ''impromptu'' fake mass...of course, hilarity ensues. Miller's Jesus takes us on a rollercoaster ride of spiritual expression that attempts to go deep into our moral conscious.  Miller embodies and encourages the audience to find ''your own personal Jesus'' in a variety of incarnations; from a southern, impossibly inclusionist preacher, to an air steward listening in to prayers coming from a doomed flight to Jerusalem.
But the really special aspect of this play is its use of multimedia. The playwright/performer is solo and manages to  entertain and engage his audience by using mechanisms such as floating cameras, dry-eraser markers, action figures and yes, sand. Thankfully, these mechanisms do not detract but for the most part add to the experience and the audience comes away with an all-together intelligent, well-rounded piece of  theatre.
Bigger Than Jesus is written by Rick Miller and Daniel Brooks and is performed  by Rick Miller. The play opened on Thursday, September 29th and will run until October 9th, 2011 at The Factory Theater in Toronto.
Posted by THE CHARLEBOIS POST at 1:53 PM