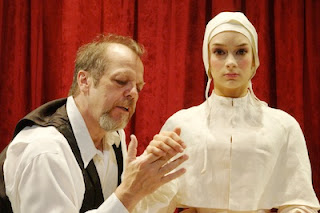 The Unique M. Molière
TNM celebrates its 60th by going back to the source
by Rachel Zuroff

Le Théatre du Nouveau Monde is currently presenting L’École des femmes by Molière, and it is superb. I was blown away by the beauty and power of the performance in all its aspects.

L’École des femmes tells the story of Arnolfe, a frankly paranoid obsessive middle-aged man who, through fear of being cheated on by his future wife, brings up an abandoned orphan in a quite peculiar fashion. Arnolfe decides the best way to protect himself from future heartbreak is by raising a child, Agnès, to be so ignorant that he may control and shape her. Arnolfe’s hope is that he may thus prohibit her from cheating on him. However, as required by a comedy, things do not go at all as planned. Instead, while Arnolfe is away on a trip, a young man manages to fall in love with Agnès and she with him. Shenanigans and scandal ensue.

Perhaps under some circumstances the plot of L’École des femmes could seem forced or ridiculous...

Perhaps under some circumstances the plot of L’École des femmes could seem forced or ridiculous but not in the able hands of director Yves Desgagnés. All of the actors in TNM’s current production gave moving performances, expressing both tragedy and comedy. Guy Nadon in the role of Arnolphe was particularly excellent. I was constantly torn between feelings of pity and hate for him, and I think that’s exactly where Nadon wanted me to be. Sophie Desmarais as Agnès and Jean-Philippe Baril Guérard as Horace gave similarly excellent performances.

The sets, lighting, music and direction were equally superbly executed and turned an excellent production into an unique event.