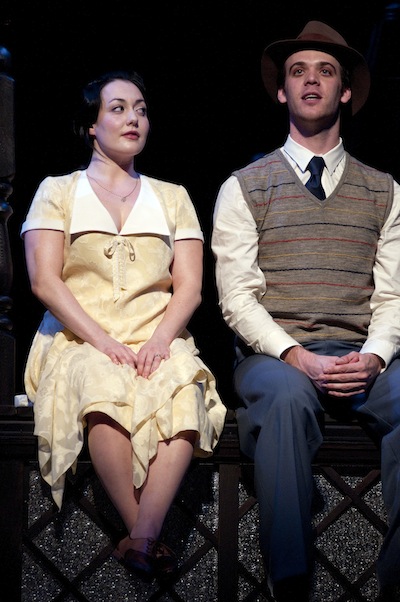 Holly Gauthier-Frankel and Jamie Mac (Photo: Andrée Lanthier
Return to Coley's Point
David French goes home
by Jim Murchison
There is a saying that “you can’t go back home”. That may be true in some circles, but I think that a truer statement for Atlantic Canadians, is that you can never truly leave home (notice I didn’t say maritime Canadians). How else can you explain writers like David French?  He was born in Newfoundland before it was part of Confederation.  His mother brought him to Toronto after World War II. Yet what he will always be most known for is his intimate stories of the lives of characters from Coley’s Point, Newfoundland.
David French's heart never left that little patch of the rock...
It doesn’t seem to matter when you left, you continue to breathe the salt air and the salt water runs through your blood.  David French’s mind may have belonged to Toronto and the world but his heart never left that little patch of the rock known as Coley’s Point,  Newfoundland. When he died last December, Canada and the World lost a great talent.
Evidence of how universal his work is, was evident on Sunday October 16th, when for only one night the all-Serbian production of ”Jitters” played in Ottawa. Unfortunately, my Serbian is worse than my French, so I was unable to see it or file a review, but Tuesday night I basked in the light of a Salt Water Moon.
Mary Snow and Jacob Mercer are characters that would be familiar to people who know the work of French. If you don’t know the characters, Peter Hinton gives you a little idea of where this play lies among the quintet of plays that David French wrote about this family, featuring the characters of Jacob Mercer and Mary Snow. It’s a play that expresses the themes of rural Canada as well as any play has.  There is something in it all that fills you with wanderlust. You feel inspired to go out and stretch yourself to experience the big wide, dangerous world. Ultimately there is a part of you that never truly wants to leave.
The only option for Jacob is to try to win her back.
Salt Water Moon timidly laps at your toes at first before it totally engulfs you like an incoming tide. The play opens on the evening of Bob Foote’s wake.  Jacob Mercer returns from a trip to Toronto with a suitcase of souvenirs and memories from a ‘Country’ far from Newfoundland. His departure was so sudden that his childhood sweetheart, Mary Snow, feels hurt and jilted and has succumbed to the advances of a rival suitor, Jerome McKenzie.  Jacob Mercer's family has always been subservient to the McKenzie’s.  The legalized slavery that Jacob’s father was put through at the hands of the McKenzies makes Mary’s engagement to Jerome even harder to take. The only option for Jacob is to try to win her back.
The sound design and the costumes support the play well, but what struck me most profoundly was the way Jock Munro’s lighting and Max-Otto Fauteux’s set design complemented each other and the story. At times you are simply on the dock at Coley’s Point Newfoundland, the masts of fishing ships jutting out at angles against the night sky. Other times you’re in the smoky, fiery battlefield of the Somme in World War I caught up in splayed sticks and mud and barbed wire of the trenches, maybe seeing a brilliant blue Nebula on a starry night walk.
Micheline Chevrier directed the production with care and a fine sensibility that respects David French’s poetic, poignant story telling.
Holly Gauthier-Frankel plays Mary Snow with a stubborn veneer, just thin enough to allow her true feeling for Jacob to peek through the cracks. She works as a maid for the right honourable Henry Dawe, Member of Parliament. Mary is eager to escape the servitude she has been forced into by hard Newfoundland circumstance. Feeling abandoned by Jacob she is forced to accept the proposal of a rival suitor, but the audience ultimately knows her first choice is Jacob.
Jamie Mac deftly plays the role of Jacob Mercer. His somewhat arrogant approach to wooing back Mary never is severe enough to overshadow his charm. We can see that his confidence springs from the fact that he understands his destiny is to be with his one true love and can’t possibly accept anything less.
Micheline Chevrier directed the production with care and a fine sensibility that respects David French’s poetic, poignant story telling. It is a tribute to the acting and directing that we meet so many of the characters of a village through the hearts of two people. Although, there are only two characters on stage there are many characters that breathe through their memories. I should let you know that I saw the play on a Tuesday after opening, so the house was not full but as I filed out of the theatre the comments were simple but heartfelt; “That was lovely.”  “What a nice play.” People lingered afterwards, examining a wonderful retrospective display of the works of David French.
Salt Water Moon is at The NAC until November 5
Posted by THE CHARLEBOIS POST at 4:42 PM