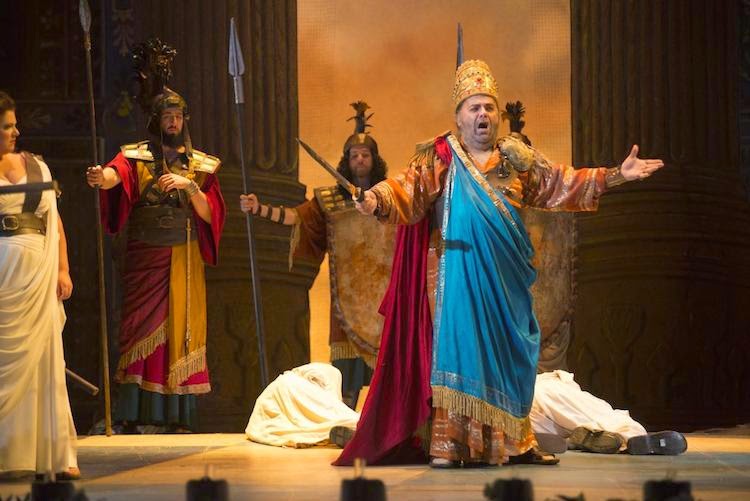 Giuseppe Verdi's Nabucco, is about a Babylonian King seeking revenge on the Jews for stealing his daughter, a vicious love triangle driven by power and the Hebrew people seeking freedom from the Assyrians. As the curtains open - on this collaboration between the Washington National Opera, Opera Philadelphia and Minnesota Opera - we are also submerged in 1842 La Scala, when Italy was under Austrian rule. We see three theatre balconies on stage and a group of upper-class Austrians taking their seats. An opera within an opera is taking place.


Conductor Francesco Maria Colombo leads Montreal's Metropolitan Orchestra throughout this impressive production set by Thaddeus Strassberger, stage director and set designer. It must be said that the cast was absolutely fantastic. Leading man, baritone Paolo Gavanelli (Nabucco) brilliantly fulfilled the demands of the role. However, the villainess of the show swept the room away with her charisma and strong presence; Tatiana Melnychenko's Abigaille was the perfect slave-turned-evil-queen.

The set was smart, using layers of curtains and drapes to maximize the stage space as the characters moved on it, giving a feel of a very bright and colourfully painted cardboard playhouse. With the opera being divided in four parts (and two intermissions), the stage, the lighting and the costumes would change constantly. And so, visually, it was absolutely breathtaking. I was very impressed by the lighting work of Jeffrey Allan Messenger, who really brought out a colour palette of turquoises, pinks and golds on stage and in the costumes splendidly. Perhaps the most impressive lighting technique was that of the shining moon during the Chorus of the Hebrew Slaves (mind blowing on so many levels). Costume designer Mattie Ullrich also rose to the occasion. The leads always popped among the others on stage, with the most intricate and colourful gowns. The villains wore warmer tones and the heroes cooler tones of blue and green. The 'slaves' wore plain white tunics, that complemented the very colourful stage decorations.

The number of people that were on stage most of the time was almost overwhelming, but the chorus is the very key to this masterpiece. So good was "Va, pensiero", that the whole cast performed an encore (despite it being forbidden in the Austrian  opera houses), fully deserving not one, but two standing ovations, with the audience singing along.

I would suggest everyone go see this, even if they don't like opera. The music and vocals are so strong and the set is stunning at all times. Visually entertaining, this opera also provides a great historical/cultural lesson on the Italian and Jewish peoples. If not for Verdi, go for the ending, the director's personal touch.