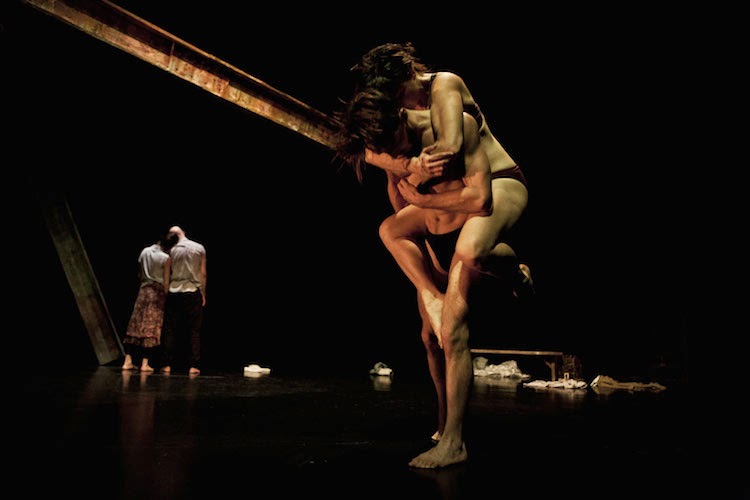 The Density of Moments
by Chad Dembski, Editor - Dance

Densité d'un moment
The first piece presented in a double bill of works that opens Tangente's season, Densité d'un moment, is a 30 minute six-person performance from recent Université de Québec à Montréal (UQAM)  dance graduates.  The piece explores the density of a moment, how it is experienced differently by each person in that moment, both the active participant and the observer.

Having been to the Studio space at Monument National a few times I am constantly surprised how a small, seemingly limited space can be transformed with limited resources.


One is first hit, before the show even begins, by the high amount of theatrical smoke pouring into the space. It was so dense and intense it was actually hard to see the other side of the space at times and led to deeper curiosity of what awaited. Instantly I was struck by the tall, sharp spears of light filling the space and creating a new architecture for the dancers. They played in and around this light, exploring the possibilities of its shape, contour and effect. The piece began to engage further once the performers interacted with each other and developed relationships. At times there were fleeting moments when the pulsing and exhilarating music by Jacques Poulin-Denis (a fantastic choreographer and dancer himself) helped anchor the piece. In what may have seemed an overwhelming amount of lighting changes and dramatic music, it actually helped bring out an original quality to the piece as it progressed. It was a fantastic example of a creative team working together in collaboration to bring out the best qualities in each other's work. While the piece lacked a certain individual stamp to it that often comes with youth it was exciting and makes me very curious what is next for this company.

In Mixed Company
After an extended intermission to re-haul almost the entire stage, the next element I was instantly struck by was two gigantic metal bars crossing the stage. A lone performer (Lael Stellick) sat on a long wooden bench peeling an orange, which from my front row seat wafted gently into my senses. He gently carries in the other three performers on his back, first one then impressively two at a time and places them on stage. Soon the bodies begin to gain an energy and a bizarre world starts to unravel in front of us. Based on the works of absurdist playwright Ionesco and Milan Kundera, more in their world views than in any singular work of theirs. The absurdity is explored through a courageous choice of placing highly intimate scenes next to highly charged and physical sections. While I struggled to see the connection between the two writers, possibly they worked best as a foundation for the two choreographers to explore their own ideas.  Individual monologues were electric when mixed with gestures and movements seemingly inspired by their text.

An exciting centre moment of the full group unity is both the funniest section of the entire evening and the most surprising. I don’t want to give it away but suffice to say it both gives homage and makes fun of popular culture in a refreshing way. As the piece develops over the duration of the 50 minutes (which seemed to fly by for me), the performers seem to let go more of the literary foundation and engage in their personal desires. This intense desire is portrayed in both subtle and highly expressive ways but is often more dream-like and tender to great effect. Lighting designer for both projects Paul Chambers supports the piece in an astounding way to bring out emotion and mood in his work. The music of David Drury and David Lafontaine is also a great addition to the piece, offering glimpses into the inner turmoil and confusion of the performers. Again it is fantastic to see a collaboration where artists enjoy the challenge of finding a common world of expression.

Overall this is an impressive season kick off for a company dedicated to showcasing new and emerging choreographers and offering mid-career artists a venue to experiment and find new modes of expression.
Sept. 18 - 21

See also: Video - Behind the scenes of In Mixed Company
Posted by THE CHARLEBOIS POST at 4:45 PM