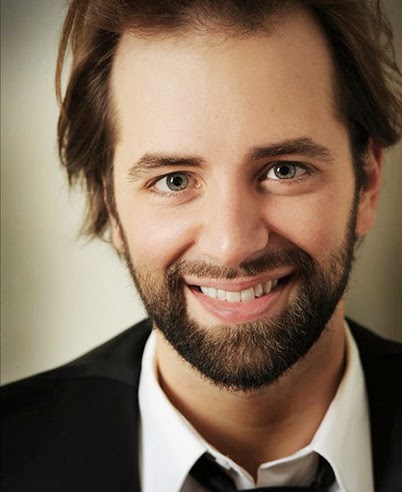 Montrealers remember seeing rising baritone Etienne Dupuis when he was part of a flash mob of opera singers staged in the busy Marché Jean Talon market in his hometown of Montreal, to promote L’Opéra de Montréal in 2010. “I love people’s faces when I start singing opera in an up-close space,” Dupuis told the Vancouver Straight alt-weekly. “We were standing right in front of them and they just became statues. People don’t realize the nature of that sound and what it does to you. It can make you vibrate.” 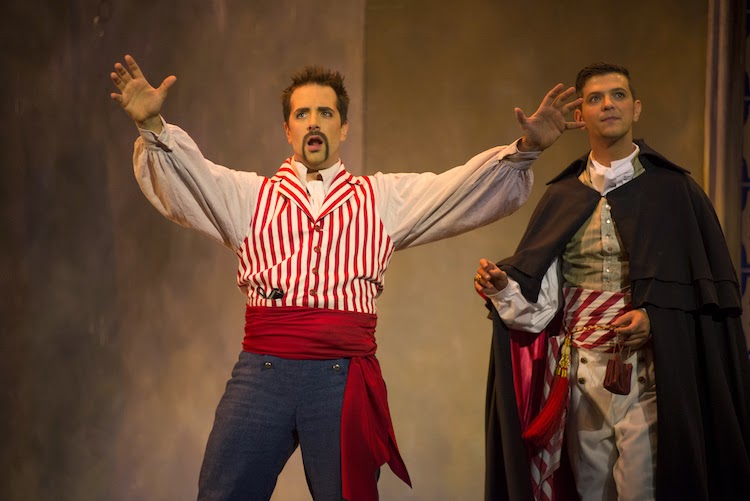 Another memorable performance was when Dupuis sang the famous “Figaro” aria from The Barber of Seville at an intimate September 2013 benefit for the McGill Chamber Orchestra. In fact, Dupuis performed with MCO conductor Boris Brott and a quintet of MCO principals, and walked up to the guest of honour, legendary French-Canadian bass opera singer Joseph Rouleau, as well as my mother (whom we call Diamond Lil), and Dupuis sang to them.

After recent critically-hailed performances as Figaro at the Opéra d’Avignon and Deutsche Oper Berlin, Dupuis is back in Montreal this autumn to perform Figaro – what many are now calling his signature role – when The Barber of Seville opens at L’Opéra de Montréal. 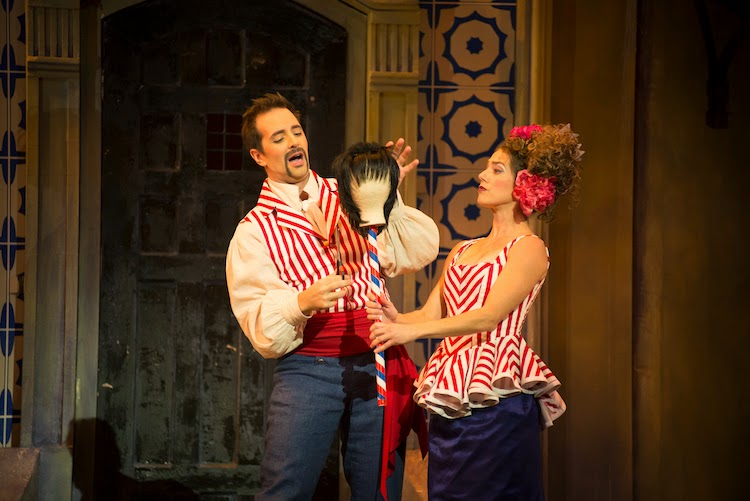 “I guess it is becoming a signature role although I do have a varied repertoire,” Dupuis told me this week. “But Figaro is a recurring one, especially in France where they love me performing as Figaro. I think it’s because it feels like it’s me, I don’t have to add that much. It fits so well in terms of character.”

After Dupuis completed his voice studies at McGill University, he joined l'Atelier Lyrique de l'Opéra de Montréal. But things really began going his way when, at the age of 30, he was a contestant in the 2009 BBC Cardiff Singer of the World competition.

“I’m not a fan of singing contests in general, I rarely think the choices of the jury reflect what was heard, but Cardiff treats everybody like a winner,” Dupuis says. “It’s quite an achievement just to be there. And everyone is treated like a winner. I was in awe of everybody. I didn’t make it to the finals – they chose five out of 25 – but I felt like I had already won.”

Dupuis’ real breakthrough came two years later, in 2011 at the age of 32, when he made his debut at Deutsche Oper Berlin as Zurga (Les pêcheurs de perles). And he landed that role despite catching a cold on the flight over to Berlin.

“I could still sing but my voice literally went down one octave,” Dupuis recalls. “The company had never heard me sing before, that gig was a vote of confidence, and I showed up the first day sick. The second day – a day I will remember forever – I was told, ‘Your voice is so beautiful.’ They liked the grain in my voice, they could hear it. I treated my cold with antibiotics and I was ready to perform a couple days later. It was the most stress I felt in my life.” 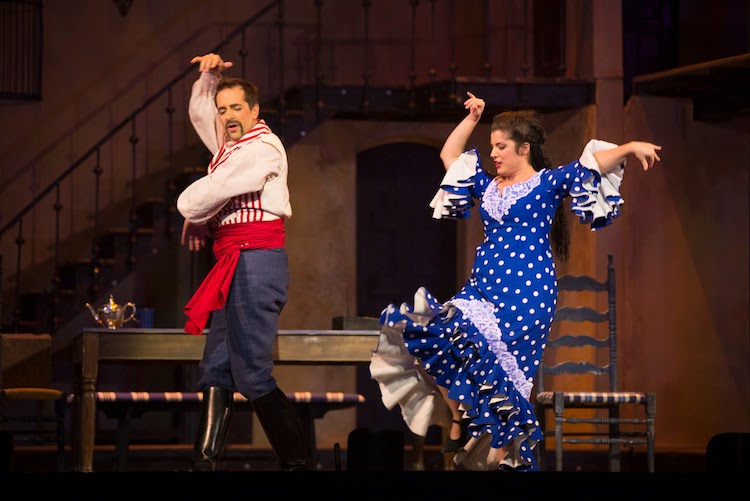 Dupuis has not looked back since.

However, he admits getting good notices from the critics is “a strange feeling, because as a young singer we all always ask what is it that will make your career, take you to the next level. The whole story behind Berlin is I auditioned because of a friend [at the Opéra de Monte Carlo] recommended me to the Opéra de Montpellier and their stage director recommended me to Berlin. You never know what’s going to make you in this business. Today they trust my name. Now I get calls from opera houses who want to hire me without even listening to me.”

Dupuis recognizes he is one singer in a wildly successful generation of Quebec opera singers making their marks on world stages. What is it about Quebecers that make them so successful in the world of opera – is it their accents? Or, I joke with Dupuis, is there something in the water?

“There is definitely a link with the way we talk,” he says. “Our accent is way more open and that creates that perfect little space in the throat by instinct, without us even knowing what we’re doing. We already have the basis set up. Also [growing up] in a different culture and different country, it helps with the drama. When you work with Canadians, people around the world say there is an openness, and opera houses really dig that.”

I can’t let Dupuis go without asking him about L’Opéra de Montréal’s monumental 2013 remount of the great Dead Man Walking opera, based on the book by New Orleans living legend Sister Helen Prejean, whom I met in Montreal last year. (Click here to read my rollicking CharPo interview with the famed Roman Catholic nun of the local Congregation of St. Joseph who chaired the U.S. National Coalition to Abolish the Death Penalty from 1993 to 1995, and wrote the international bestseller Dead Man Walking, the autobiographical account of her relationship with convicted murderer Elmo Patrick Sonnier.) 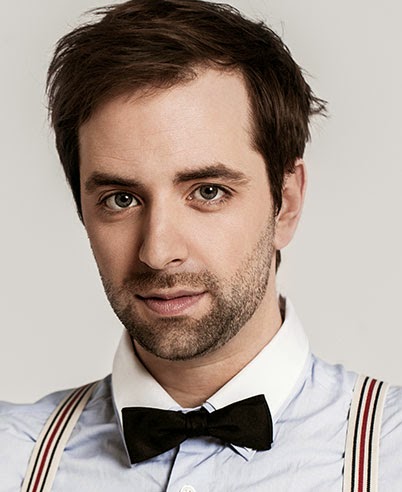 “My relationship with L’Opéra de Montréal has changed over the years,” Dupuis tells me. “I began as a baby at the age of 23 straight out of [McGill] University, I sang in their atelier for three years, and when I left they stopped hiring me. I didn’t get anything, didn’t sing there for a long time. Were they letting me grow up? That changed with back-to-back performances: Starmania Opera [in March 2009] in which I played Johnny Rockfort, and then [in Sept. 2009] I played Silvio in Pagliacci. That inserted me back in their roster and I’ve had [L’Opéra de Montréal’s Artistic Director] Michel Beaulac’s vote of confidence ever since. They’ve taken risks with me – like my Joseph Desrocher in Dead Man Walking.”

Dupuis says it’s nice to be back home in Montreal, performing where it all began for him. Now pushing 36, Dupuis knows who he is and where he comes from.

Says Dupuis, “I remember being asked by another singer if I did not achieve my goals as a singer by the age of 35, would I then have failed? I said to him I didn’t understand the question and I still don’t. I take it one gig at a time. To be respected means keeping the flame lit inside of me and inspiring people around me to do the best that they can too. The minute that stops is the day I will find another job.”

Dupuis pauses, then adds, “Honestly, if I didn’t get hired by all of those opera houses [around the world], I would still do my job this way, even if I performed just one gig a year. I’d rather sing just once in a tiny opera house and give all that I can than do all these professional compromises just to sing in the big opera houses.”

Etienne Dupuis stars as Figaro in L’Opéra de Montréal’s production of The Barber of Seville at Salle Wilfred-Pelletier, Nov. 8-11-13-15-17 (a fifth night was added due to strong box office demand), at 7:30 pm nightly. Running time: 2 hours  50 minutes with one intermission. Click here for more details and tickets.