Letter From New York: The Death of Klinghoffer 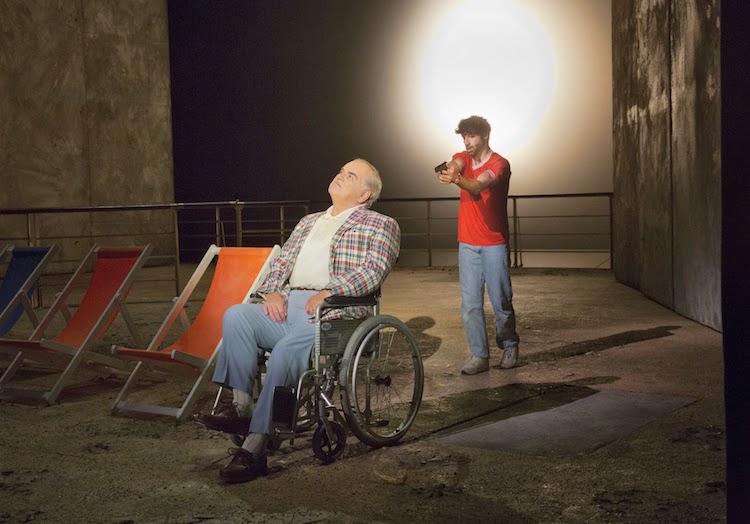 [PUBLISHER'S NOTE: In the past we have asked our contributors to send in reviews of productions in cities they were visiting: art as seen by Canadians abroad. In this case we asked Lisa McKeown, one of our most politically astute contributors, to review a highly controversial piece playing at the Metropolitan Opera both because it has become an international story, but also because it is a work which may, in some incarnation, make its way to Canada. I am very proud to be presenting this piece; Ms McKeown cuts through the noise. GLC]

The very controversial opera, John Adams's The Death of Klinghoffer, is currently playing at the Metropolitan Opera (Met) in NYC. The opera is based on the 1985 hijacking of a cruise ship by Palestinian terrorists. In the course of events, they shoot Klinghoffer, a disabled Jewish man who was celebrating his wedding anniversary, throwing his body and his wheelchair overboard.

I say controversial because it is being accused of glorifying terrorism, and of being anti-semitic. The program even contains a letter from Klinghoffer's daughters, stating that while they support the arts and the ability of narrative to explore troubling topics, that this opera "presents false moral equivalencies without context and offers no real insight into the historical reality and the senseless murder of an American Jew. It rationalizes, romanticizes, and legitimizes the terrorist murder of our father." While I disagree with the latter half of the statement, the first half is precisely on point.

First, I think it can be tricky to interpret these sorts of things. Whether or not something is offensive often comes down to how something is depicted, rather than the fact that it is depicted. There is, admittedly, a grey area - Lars Von Trier and his increasingly odious opus of movies depicting graphic violence of women come to mind here - one movie depicting violence against women is one thing, but several films later one begins to wonder if there is something beyond a noble intention at work. Ultimately, though, while this opera and this production are problematic, I'm not sure that anti-semitism is obviously the culprit.

Admittedly, opera seems like a good medium for this kind of story: it's a terrorist attack, the stakes are high for the victims as they fear for their lives,  and for the terrorists who are acting based on intractable ideals. But it is probably important to note that the opera was written in 1991, when the incident was still fairly recent in political and cultural memory. The writers could rely on a certain amount of public knowledge. Thirty years later, the production has to attempt to educate people about what happened, and this leads to some unfortunate clashes in the production.

This promising beginning is followed by a distinctly dissatisfying telling of the main story.

The opening scenes powerfully portray the emotional history of Israel and Palestine: a history of displacement, of loss, of some attempt at retrieving what had been taken. The lyrics were personal, but they were not those of any particular individual. Sung by the chorus, they ended up occupying both the public and private senses of emotional and cultural memory, and helped to frame the story by setting up the deeply entrenched personal, social, and cultural weight of the conflict.

This promising beginning is followed by a distinctly dissatisfying telling of the main story. As a general note, the mood of what it might have been like was not evoked. The staging and the movement was controlled, and slow and static. There was nothing to evoke the atmosphere, the collective antagonism, or the resentment that inevitably builds with this kind of conflict.

But more than this, there was no satisfying depth to the psychology of the characters, on either side. Klinghoffer's outrage is dramatic and powerful, but it doesn't reveal much depth to his character to help us place his actions in any sort of context. And his intervention, while admirable, goes too far when he accuses one hijacker of enjoying violence for violence's sake. This looks petty and frustrating for the audience, because despite this slip in judgment, there's no build up to it, nor is there any denouement for the character: this is basically all we see of Klinghoffer. But what is frustrating is that I'm not sure his actions are a successful comment on his character, nor are they able to represent a culture at large.

And while there were a few attempts at displaying the background of the hijackers - Mamoud sings about the freedom of birds, and Omar does an interpretive dance while he remembers his mother speaking of the life that was stolen from them - neither of these really achieves anything very profoundly insightful the way that perhaps other narrative art forms - fiction or non fiction - might be able to. We see that they feel strongly, but not really why they feel this way. If some claims of anti-semitism rest on the fact of the terrorists being legitimized, I don't think that charge gets its hooks in. The opera doesn't glorify their cause so much as it makes them seem like emotional adolescents.

My own experience of the production must have been consciously and unconsciously biased by current ideology in ways that probably don't even occur to me.

The clash in the opera's aims also emerged in the directorial choices in relation to the hijackers. A friend noted that they were extremely typecast in a way that might evoke our post 9/11 nightmare images of terrorists. What this ends up doing is reinforcing our current ideas about terrorism, instead of doing what the opera ostensibly wants to do, which is to consider the attack in a poetic way, in a way that encourages imaginative reflection on deeper truths. Since having that conversation, I've wondered about how 9/11 might be framing how we see this production, and how it might have been directed with a view to going against some of the cultural assumptions we have, instead of buying into them. My own experience of the production must have been consciously and unconsciously biased by current ideology in ways that probably don't even occur to me. So much so, in fact, that the final scene with the disembarking of the hijackers is absolutely baffling.

It must be said, Michaela Martins was excellent as Klinghoffer's wife, and closed the show with a wonderful display of shock and grief at finding out about the death of her husband. While the show closed to mixed emotions from myself and the rest of the audience (some jumped to their feet, nearly in tears while others looked on, not clapping and unmoved), the audience confirmed my impression of Martins' performance, collectively giving her one of the biggest roars of approval at the end of the evening.

Running time: 3 hours including intermission
Posted by THE CHARLEBOIS POST at 12:01 AM