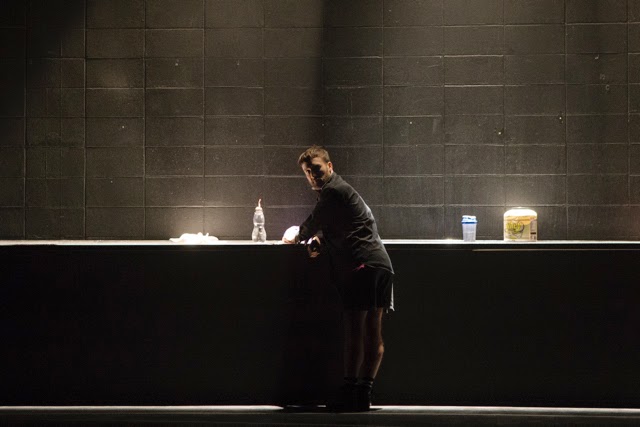 No end in Sight
by Caitlin Murphy, Senior Contributor

Winnin' is a compendium of gestures that, like its truncated title, are reluctantly reaching towards completion. Choreographed and performed by the brilliant Dany Desjardins, who has previously created All villains have a broken heart (2008), On Air (2009) and POW WOW (2011), it's an accomplished and powerful piece that explores our obsession with winning, and encourages us to lay down our tools of self-inflation.


Desjardins first enters from the wings, naked, wrapped only in a transparent blue shower curtain; as though emerging from the water, his movements are slow, deliberate, like man's first cautious steps on earth. Through evocative lighting, he casts a seemingly impossible shadow across the opposite wall, that slowly shrinks as he moves towards it. He is introspective and focused, playing with his curtain and fashioning from it various cloaks.  Suddenly though, he is shocked by our watching him; he lets out a shrieked french expletive, and runs offstage.  Man's first sense of shame will lead to his self-conscious shielding.

The rest of the piece is a mediation on how we manufacture feelings of conquest and cope with or cut ourselves off from feelings of vulnerability. In one scene, we're blasted with an annoyingly 'inspirational' pep-talk; a motivational speaker brashly spews out every self-help cliché, as Desjardins, half-heartedly makes himself a power drink and slurps it down. At first his movements are lethargic, beaten down, but as the voice hammers on, Desjardins starts fumbling towards the assumed poses and postures of power and superiority. He is roughing things out, sketching them in, and it's fascinating to watch these stabs at something recognizable but not meaningful or understood.

In another sequence, Desjardins delivers a diva-like dance performance, complete with all the hyper-sexualized gestures we've become strangely inured to. Once again though, his movements convey an odd, but potent mix of insecurity and commitment, hesitation and insistence. Performing the dance moves so self-consciously and half-assed, he draws clever attention to how ultimately hollow and hopeless they really are, even at full throttle.

The piece makes evocative use of sound and lighting throughout, most notably in its movements between stage lighting and work lights; at various points the house lights, or actual lights of the theatre were turned on, creating an exciting inter-play between 'the performance' per se and an idea of something 'more true.'  Desjardins is not only a beautiful dancer, but a compelling actor. A scene of a phone call, a banal and mono-syllabic exchange with his mother, was riveting. He is incredibly comfortable onstage, and his delivery is profoundly grounded. Even as he continued the phone conversation and wandered off stage, he held me.

Winnin' is an effort to acknowledge our need to strip things back and admit that the promises we have been made about the merits of success, ego-gratification and being on top, have been empty ones. Trust these, subscribe to these, Desjardins suggests, and you will be shockingly disappointed.

For curtain call, Desjardins re-emerges, and with tongue pressed firmly in cheek, encourages us to sing along with him to a horrible karaoke performance of a perfectly apt 90's song called “Act Like You Know.”  He is purposely off-key, awkward, and stumbles by rote through uninspired blocking. He is bent on getting the spotlight to stick with him, even though he's repeatedly blinded by it. It's a delightful send-off, both humorous and layered, and a brilliant coda to a show that by its very nature shouldn't know how to end.