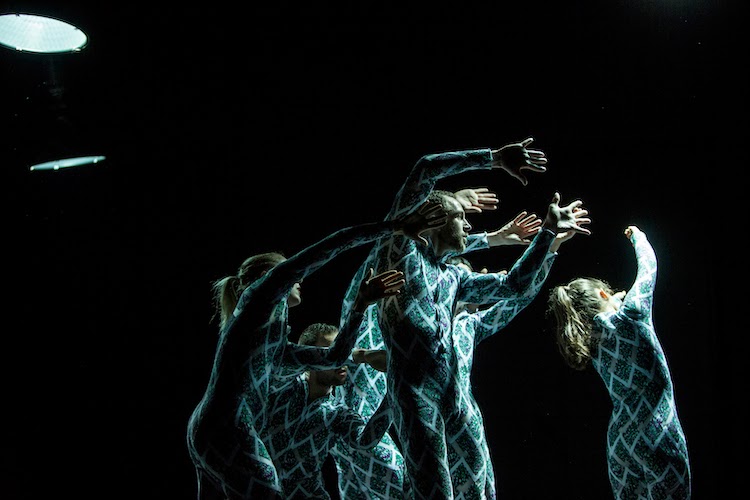 Innate Appreciation
by Jay Catterson, Editor, Dance
Born out of an artistic residency at CERN in Geneva, the largest particle physics laboratory in the world, Swiss choreographer Gilles Jobin's QUANTUM utilizes contemporary dance as metaphor for the forces that govern the universe: matter, time, gravity and space.


Featuring six dancers adorned with designer Jean-Paul Lespagnard's chevroned metallic body suits that scream "Eureka! Electricity!", QUANTUM showcased Jobin's dynamically athletic (at times acrobatic) choreography that wove static contractions with flowing, connective movement. Random became unified; asynchronous became synchronous, and vice versa. Cutting, slicing movements interwove with static, majestic poses evocative of Greek sculpture, then descended quickly into random collisions. Circular, fluid motion became erratic backwards rotations. The possibilities of movement, just like particles themselves, were unpredictable, yet had a sense of purpose and order. Add to that some truly mesmerizing partnering sequences, including one notable pas de deux before the finale.
Even the lighting scheme, dubbed "lumino-kinetic" by German visual artist Julius von Bismarck, used four oversized industrial potlights to illustrate principles of motion; these lamps began stationary, then slowly moved in a parabolic motion into a more fervent and out of synch rhythm before swinging pendulum-like at the conclusion of the piece. The soundscape, featuring a score by Carla Scaletti that incorporates data from the Large Hadron Collider, crept up on you from all sides, with its eerie snap-crackle-pops interspersed with frightening sounds right out of a sci-fi slasher flick.
At times the eerie sight of bodies with the swinging lights was truly anxiety-inducing, fuelled by edge-of-your-seat nail-biting tension. Bizarre? Perhaps. Compelling? Absolutely. The beauty in QUANTUM's movement transcended the mystery and eeriness, quite like the laws of particle physics, which not all of us might understand fully, but can innately appreciate on a different plane of our own human comprehension.
October 16 - 18
Posted by THE CHARLEBOIS POST at 5:08 PM