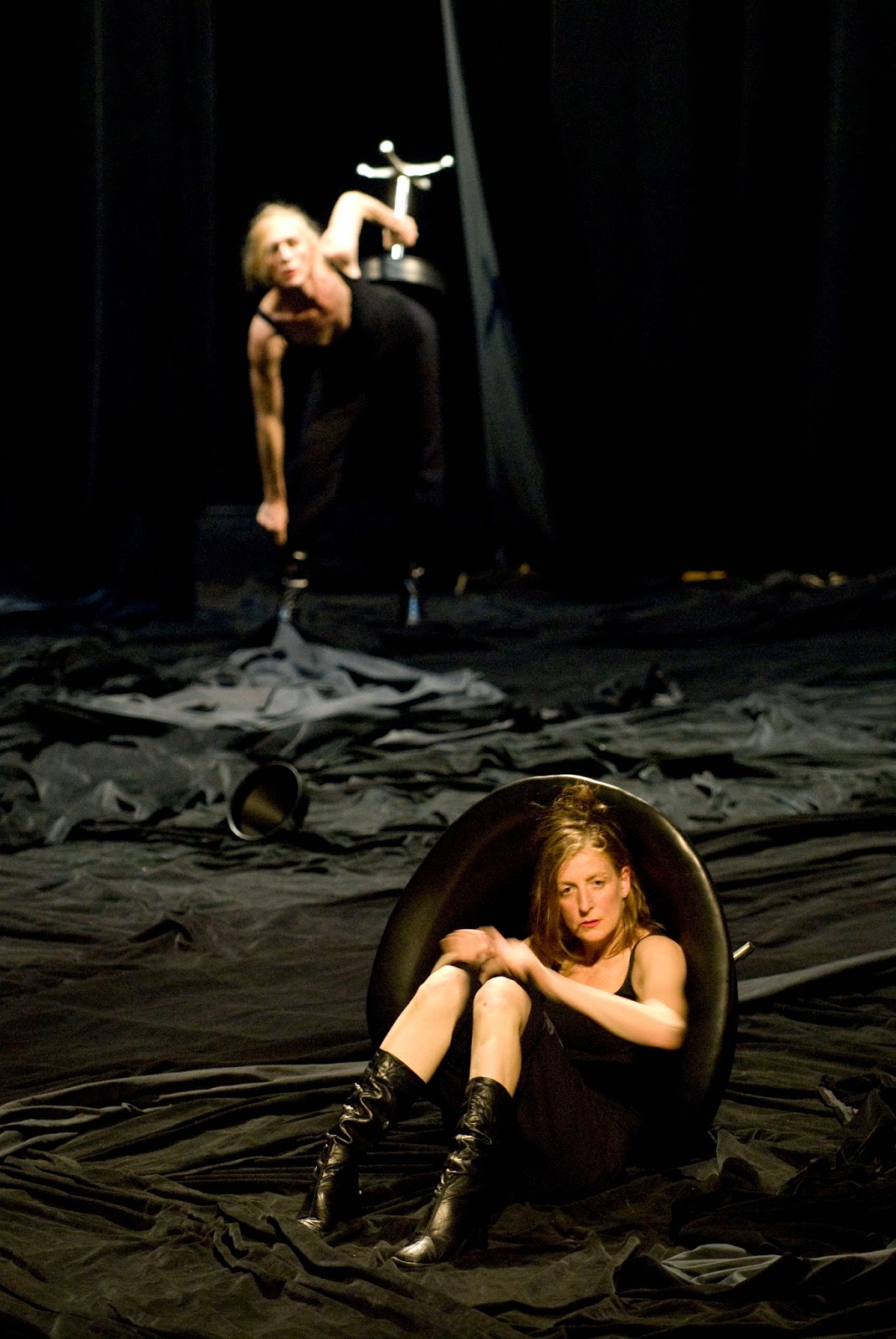 
As a new mother, when my son was crying in public, I often felt compelled by the eyes of strangers to perform the role of concerned mother. And the problem wasn't the concern of course, but the performance. I'd quickly vacillate between stinging resentment and a strange compulsion to keep up appearances. This odd dance – between begrudging what's expected of us, while simultaneously delivering it – may not be a uniquely female experience, but it often feels so. It's a feeling that's being hotly-debated in the media at the moment, and one that is rendered exquisitely palpable in Gustavia.

Presented at Agora de la Danse, and performed by French choreographer Mathilde Monnier
and Spanish dancer La Ribot, this one-hour piece is a delightfully witty and resonant combination of contemporary dance, clowning, text and comedy. The two women, both dressed in black underwear, a variety of black shirts, and black footwear, come across as reluctant twins, sometimes mirroring, sometimes mocking one another.  Through repetition of movements and cycling through sequences, the piece examines the strange paradox of behaving unconsciously and self-consciously at the same time.

Gustavia opens with the two women walking nonchalantly up to a stand-up microphone to begin a duet of whiny vocalizations. We slowly come to understand their morphing cries as a performance of grief, a contrived demonstration of female tristesse, complete with eye-dabbing and competition for most heartfelt.  Similarly, in another section, the women face-off in a disinterested knee striptease;  the bored, but rapid repetition of the gesture is both funny and unsettling.

The massive stage floor is completely covered in layers of lush dark fabrics, that the women sometimes glide elegantly across, parade triumphantly through, or clumsily trip over.  The staging of the piece delightfully bleeds off the stage; the women hide behind or hang from the blacks, tumble off the apron, seem to get lost somewhere offstage, only to find us again. Appropriate to their themes, they resort to and wrestle with various props and accessories:  hats, boots, shirts, buckets, stools and such.

With her long flailing arms, wildly rotating wrists, and repeated pratfalls, Monnier is the more compelling physical presence. La Ribot's comedic skills are sharper though, her deadpan deadlier, especially when she gracefully walks out on stage only to be pulled back by a microphone cord that is too short. Together they form a divine duet.

Gustavia is well sustained, and the dynamism within, and differences between, the varying chapters are engaging throughout. In the final chapter of the evening, Monnier and La Ribot stand on stools and animatedly ream off a list of different kinds of women. A litany of phrases beginning with the word “une femme qui...” become a cacophony of categorizations, as they overlap one another and overwhelm us.

Gustavia is an accomplished, polished, madcap piece delivered by two powerhouse performers. They subtly and brashly convey that often being a woman is feeling you have an itch you need to scratch but that will bring no relief.