From the Archives: Bass-Baritone Gregory Finney on starting a career 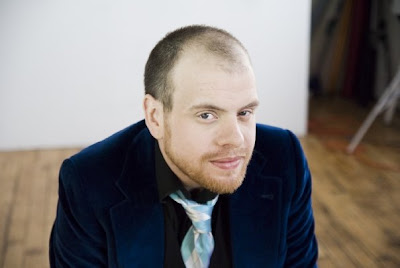 “Move to Toronto: you’ll have no trouble finding work,” was the advice given when I asked for feedback after an audition. “Any other advice?” I asked, “Work on your singing.” Ouch!

I took their advice and moved to Toronto in the late summer of 2005. Being affable, self-effacing, bilingual and with a knack for creative wardrobe choices I found myself making some pretty decent money in the world of corporate wireless telecommunications. Steady income, benefits, vacations, and bonuses. There was only one catch, I was chained to a desk for 40 hours a week and not singing.

Since I was having a ball, small-town gay loose in the big city, I kind of lost track of the first month or two I lived here. But I needed to sing again. I was acting in some underground theatre, in a role created with me in mind, and killing it, but I still wasn’t singing.

To sing this intensely beautiful piece on that stage and receive a standing ovation was one thing: to shake the hands of the holocaust survivors in the audience afterwards is something I’ll never forget.

After studying as a Bass-Baritone, I had recently started billing myself as a tenor. I went out and auditioned for the Toronto Mendelssohn Choir. I walked in and sang a passable “If with all your heart” from Mendelssohn’s ELIJAH. After I finished singing in a small office at Roy Thomson Hall into a Styrofoam ceiling, Mr. Noel Edison looked at me and said “Well… You’re a tenor and you can walk, you’re in!” Good enough for me! So I joined the ranks of choir as well as its chamber ensemble the Toronto Mendelssohn Singers. In two days I was singing through Beethoven’s 9th and receiving my copy of the score for the Mozart edition of Handel’s Messiah to start working on right away. That season saw us tour to Carnegie Hall in New York City for the New York premiere of Ruth Fazal’s ORATORIO TEREZIN. Its piece comprised of texts that were Hebrew scriptures, and poems and verses found in Terezinstadt written by young children as they waited to be carted off to death camps during WWII. To sing this intensely beautiful piece on that stage and receive a standing ovation was one thing: to shake the hands of the holocaust survivors in the audience afterwards is something I’ll never forget.

While on this particular trip to NYC, I received a message from my best friend Linda Gallant. A stunning Amazonian mezzo, she was cast as Katisha in THE MIKADO. As luck would have it, they were almost two weeks into rehearsals and still had no Nanki-poo. I landed the role and it was a production with mixed feelings/memories, but it WAS my first full role here in Ontario. I met some great friends doing that show, friends I still see regularly actually. I’ll say that for community theatre.

That role lead to my auditioning for A FUNNY THING HAPPENED ON THE WAY TO THE FORUM at Hart House Theatre. Cast as Marcus Lycus, purveyor of the choicest courtesans, the show’s concept saw me more of an in-drag-madam-teaching-the-girls-the-ropes more than the sleazy pimp-slash-used-car-salesman-slash-pawnshop-dealer representation he’s often given. After doing the entire rehearsal run and show run in 6-plus inch heels, I found myself a favourite character actor amongst my Musical Theatre peers.

Then my voice took over. It got bigger, fuller, and warmer. It got to the point where when I was playing Rev. Shaw Moore in FOOTLOOSE: The Musical, my microphone would be cut in big ensembles as it’s the only way the sound technician could fit me into the mix. Part of me was super proud to be  “the loudest thing on two legs” but the rest of me was like, “I’m more than JUST volume here guys.” Then everything changed.

“So, this company I sing for needs tenors in their ensemble. Its operetta, fully staged, full costume with orchestra, what do you think?” said my friend Linda, yes the same one who got me my gig with THE MIKADO. “Sure, is this that TOT company?” “Yeah, Toronto Operetta Theatre” So I booked a slot and brought myself down to Toronto’s Leslieville district and sang an audition for Guillermo Silva-Marin and the rest, as they say, is history… thus far.

I walked into the audition for Toronto Operetta Theatre in my splashy striped shirt, lime green sweater vest with matching suede shoes. “What will you be singing for us today?” Guillermo asked. “I have a musical theatre piece and a Mozart.” I responded . “Great, let’s hear the Mozart.”

When I finished Guillermo - who by this point had become ‘Bill’ - said to me “Well… you have a voice.”

Now let’s remember, I’d been singing quite a bit, but it had been a while since I’d spent any time in a studio with a teacher. So I sang my “Un Aura Amorosa” from COSI FAN TUTTE, which as it turns out is one of the hardest arias in the lyric tenor canon. I didn’t know that, nor did I care. I sang it. Only passably; but I sang it.

When I finished Guillermo - who by this point had become ‘Bill’ - said to me “Well… you have a voice.” Seeing as this dude sang at the Met, I’m going to take that as a compliment. I was sitting there waiting to be dismissed and sort out the preliminaries of joining the ensemble. When all that was done, the accompanist came up to me and said, “I wouldn’t sing this again without another proper coaching.”

But before I knew it, I was singing in complete seasons with both Toronto Operetta Theatre and Opera In Concert. I’d started enrolling in summer programs and conductors were starting to call me to sub in choruses. I may not have been Pavarotti or Alagna, but I could sight read like you wouldn’t believe, and can learn blocking in my sleep. Bing, bang, boom from 2007 – 2010 I was averaging about 16 different shows a year, everything from Mozart to Weill to Glinka to Massenet.

I joined the cast in the Bass Baritone roles – and it ended up being a revelation for me.

While working on a production of PIRATES OF PENZANCE with TOT, I got a random Facebook message from my friend Miriam Khalil. We’d done a couple of shows together (THE BIRDSELLER, KAMOURASKA) and she had been talking to her husband Joel Ivany who recently founded a company called Against The Grain Theatre about me. He was mounting a production of LA BOHÈME in a bar here in Toronto with a new libretto that set the story and characters in 21st Century Toronto.  They were looking for a Benoit/Alcindoro. Joel wanted to cast them a little differently from the convention and Miriam went to bat for me over and over. I joined the cast in the Bass Baritone roles – and it ended up being a revelation for me.

I had been struggling the past year or so.  My upper range was not freeing up, or getting easier: it was actually working the opposite way. Vocal fatigue happened – which really terrified me, I had never experienced it up until now – and then I had to start turning down gigs, which led me to having to have a day job again. The buzz amongst my friends and colleagues is that I hadn’t sounded better in their memory and that it seems like that’s where my voice should sit. Guess what? It was exactly where my voice should sit. I had spent the last six or seven odd years trying to sing tenor because teachers told me to, not because my voice did.

This past year has seen me do more and more baritone work and was just vindicated through playing Figaro in Darius Milhaud’s LA MÈRE COUPABLE at Summer Opera Lyric Theatre.  Polytonal, contemporary and a lead role; a trifecta that would normally scare the heck out of a singer, but turned out to be a magnificent challenge for someone like me who felt like I was letting cast after cast down by not keeping up on the musicality front. Turns out it wasn’t musicality I was lacking, it was singing in my own voice.

So in closing I’d like to pass on some advice to the younger singers coming up, fresh out of Undergrads and Artist’s Diplomas.

Now here I sit with an upcoming Papageno in DIE ZAUBERFLÖTE and Il Conte in NOZZE DI FIGARO. People are talking to me about GIANNI SCHICCHI, Verdi’s MACBETH, and other projects. So in closing I’d like to pass on some advice to the younger singers coming up, fresh out of Undergrads and Artist’s Diplomas.

First, take an acting class and a dance class - whether it was offered as part of your degree or not. These two skills are invaluable in the Operatic world. You WILL be asked to waltz and if you don’t know the difference between upstage and downstage (don’t laugh I’ve seen this) it’s guaranteed to get in the way of you securing future work. Improv classes, ballroom classes, zumba ANYTHING that gets you into your body. You need to know what your body is doing all the time on stage, but you need to be able to check in with it quickly and without sacrificing your character.

Secondly, practice, practice, practice. I know it’s old school cliché, but I’m serious as a heart attack here. The more work you do at home, the less time you’ll need to do work in rehearsals. This is the point, most companies don’t have the time or the money to have you do your studio work during their staging and tech times. If you miss an entry in rehearsal, go home and drill it ‘til you don’t again. Only with being completely comfortable in what you’re doing can you fly without the net: and that comfort comes only from hard work.

We do something that everyone CAN do on some level...

Thirdly, I love voice teachers and coaches, but don’t set all three thousand percent of your artistry in their hands. There’s one opinion you do need to take into account and it’s the most important one. Your body’s. Listen to it. Know it intimately. Treat it well and if something hurts, even a little bit, stop doing it. Test your limits, try new things, but if it hurts: STOP.

Fourth(-ly?), don’t take notes personally. When working on a show and a director or music director asks you to change something, it’s for a reason. They’re pursuing excellence and want to help you as a performer make the strongest choices you possibly can - choices that also fit in well with their vision for the work. Remember, they’re the painter, the score is the canvas and you as the singer/actor are the paints. Knowing your role in the creation of this work is key to not letting your ego get stepped on if the director changes a choice you’ve made.

This is an extremely rewarding line of work to be in. How many times has someone said to you or a colleague “Oh, I wish I could sing”? We do something that everyone CAN do on some level, but we have our natural predispositions and the training and technique to produce it on such a heightened and intellectual level.  As you go along building your repertoire, your experiences and your resumés remember this: It’s just singing, and operas are plays – and they’re called ‘plays’ for a reason. Don’t take yourself too seriously.