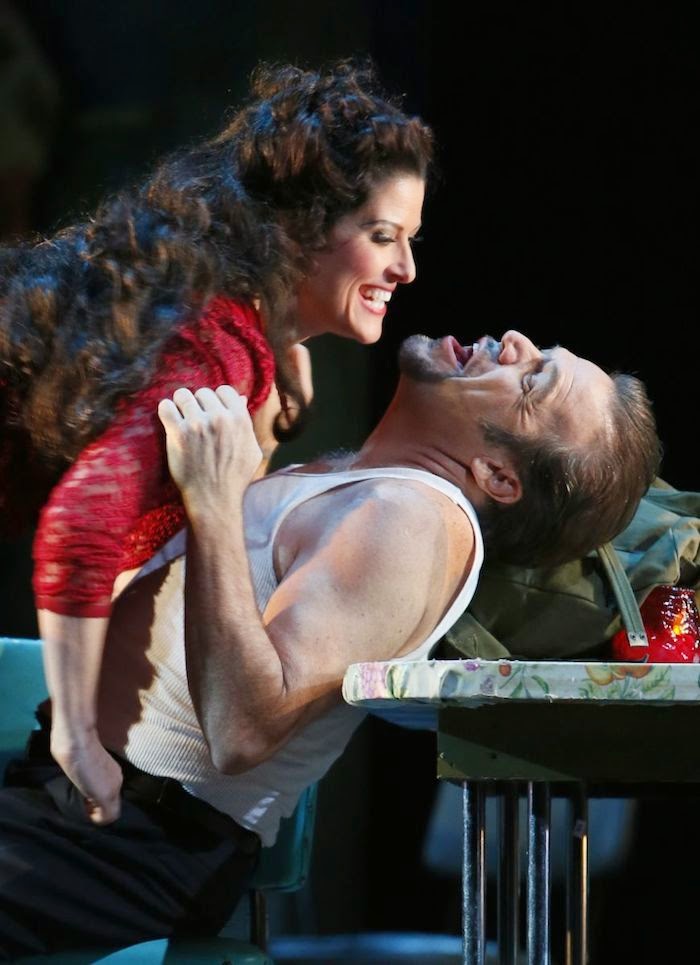 Inspired (and Flawed)
by Jay Catterson

After a long and languid summer break, the 2014-2015 Vancouver Opera season opened on Saturday night with the sure-fire opera hit, Georges Bizet's Carmen. This was a great move on the part of Vancouver Opera to reinvigorate interest in the company, and the music is recognizable enough for many opera newcomers to feel a sense of comfort. In fact, it seems like the company has reinvigorated their brand, with a freshly minted logo and show artwork that reflects a fresh, contemporary opera company that is both relevant and relatable.


Now how did the show fare? Well, there were definitely hits, but misses as well. The orchestra, conducted by Jacques Lacombe, was in fine form, and combined with the immaculately voiced chorus, provided a great sonic soundscape that Bizet's Carmen demands. The leads were vocally on point as well, with the true standouts being tenor Richard Troxell (at this performance) as Don José and soprano Marianne Fiset as Micaëla. Both their performances were balanced and emotional, and the intricacies of their characters transcended the spectacle around them. As for Carmen herself, sung by mezzo-soprano Kate Aldrich at this performance, she was vocally impressive; however, her delivery seemed a tad lacking in the acting department. Quite frankly I didn't see what all the fuss was about. Why was everyone so madly in love with her? I didn't find her character convincing enough, nor that seductive nor alluring.

The pacing of the show, under the direction of  Joel Ivany (making his company début), suffered in Act One, but found its footing in Act Two. Also making his company début, Jason Hand's lighting design was a tad janky with the last two acts being too marred by shadow; so much in fact that the brightly lit chorus pulled too much focus away from the climactic struggle between Carmen and Don José in Act Four. And the fight direction by Nicholas Harrison definitely needs work. I could have sworn Don José threw a slap from five feet away that landed perfectly on Carmen's face. Michael Yeargan's scenic design (modified by Camellia Koo for this production) was visually interesting, shifting the story away from late 19th century Spain into a more contemporary Latin American world of the 1930s/40s; think less España and more Evita.

(Actually, I would've welcomed the appearance of Eva Peron in this show; it would have made things more exciting). And François St-Aubin's costumes, on loan from L'Opera de Montréal, were lavish for the most part, but did have some ridiculous missteps, in particular toréador Escamillo's entrance inducing shrieks of laughter with his hideous brown fur-lined mustard yellow suede bolero jacket and aviator glasses (he looked like Johnny Cash channeling U2's Bono).

All in all, this Carmen, with its flaws, is an inspired production that is sure to please most operagoers, and will be a huge draw for Vancouver Opera as it starts its new season. However, with an opera this grand and well-known, I was expecting much more.