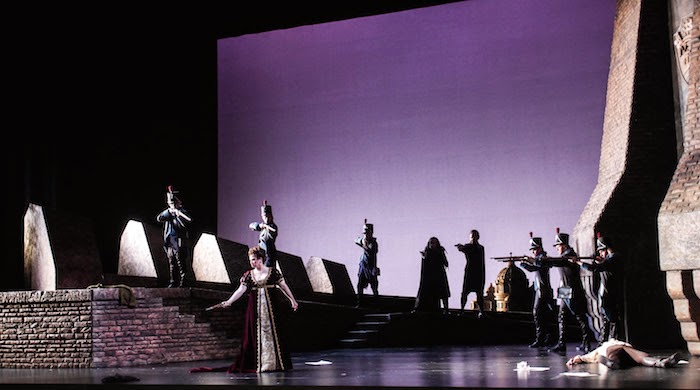 Due to an unpredictable circumstance I ended up seeing the second night of Tosca rather than opening night. As it turned out, that allowed me to see the original cast as it was intended to be performed. A medical emergency in the Opera Lyra company had required a radical improvisation on Saturday's opening night in the grand tradition of the show must go on.


Unfortunately the house was not full. While it is a large house, there are only four performances.

The scenery design by David Gano was provided by the New Orleans Opera Association. While all three acts provided appropriate mood the third act set was spectacular. The design gave the illusion of the stage being a mile deep with its clever use of perspective of the building in the distance and the majestic height of the stone walls in the foreground.

Stage director Guy Montavon moves the characters through their action with confidence creating memorable effective tableaus and he is greatly assisted by the lighting design of Kevin Lamotte that brightly illuminates the principals and splashes an ominous blood red light at times of certain foreboding peril.

Then of course there is the cast. As for the performances this is perhaps the most balanced of Opera Lyra’s productions of the last two seasons. All of the performers have their opportunity to shine without ever upstaging the principal characters of Tosca and Cavardossi.

James McLennan was thankfully none the worse for wear as Spoletta after his harrowing experience on opening night and his voice was in good form. Peter Strummer as the snuff addicted padre Sacristan provided comic relief in a nice role that had an almost commedia dell'arte air to it. Giles Tomkins played a number of roles and was most effective as the escaped prisoner Angelotti looking ragged and hungry as he scurried about the stage looking for places to hide. Dion Mazerolle effectively rounds out the supporting cast as Officer Sciaronne.

Todd Thomas has a nefarious, smug air as Baron Scarpia and plays the villain with such pompous self-entitlement that evoked some laughter from the audience as his views on women and lust were so audaciously misogynistic. His voice and character were very well honed.

The lovers - David Pomeroy as the artist Mario Cavaradossi and Michele Capalbo as Floria Tosca -  clearly needed to shoulder the bulk of the dramatic and vocal workload and did not disappoint. Pomeroy’s Cavaradossi is a powerful enigmatic presence and Capalbo’s Tosca is a smouldering, jealous diva waiting to erupt with passion. When they reach that passionate crescendo it creates the most powerful points of the opera.

Unfortunately the house was not full. While it is a large house, there are only four performances. Whether this is typical of a second night, whether the current attention span of the public - given the instant and virtual society makes opera seem less accessible - or some other reason accounts for this I don’t know. Whatever it is, opera fans should see this. While it is not my absolute favourite of the last two seasons it is the most balanced in its execution and certainly the entire cast and crew from chorus masters Laurence Ewashko and Jamie Loback to repetiteur Judith Ginsburg and stage manager Kelly Luft have demonstrated their collective mettle in finding a way to make the show go on. If opera is to thrive in Ottawa the public has to take advantage of the smattering of opportunities to see it.

[Editor's note: aside from the medical emergency on opening night, Opera Lyra also fired Valerian Ruminski, set to play the Sacristan, due to homophobic remarks the Russian singer had made on Facebook. See the CBC report. The Charlebois Post - Canada would like to salute the company for moving so quickly on Ruminski's inexcusable remarks.]
Posted by THE CHARLEBOIS POST at 12:03 AM