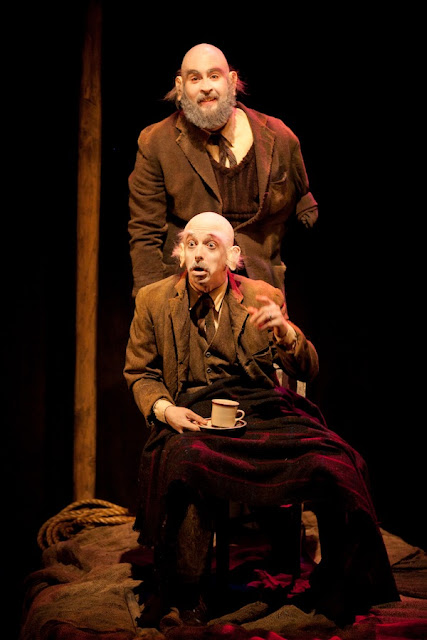 In a spirit of Samuel Beckett meets Father Ted, SideMart Theatrical Grocery’s production of Trad, by Irish playwright Mark Doherty, is riveting – beautifully staged and superbly performed; deliciously absurd, but deeply moving too.  Originally produced in 2007 at the Segal Centre’s Studio space, this dark comedy is currently on tap at the Centaur Theatre – and Montreal audiences should feel very very lucky that it is.

As its title suggests, Trad is a play about tradition, but also about how much can be truncated, lopped off or lost – from a word, a body, an identity, a nation – before what remains is no longer recognizable.  100-year-old Thomas has only one arm, and his Da has only one leg.  But in a sort of upside down Godot, the aged male duo sets off on a search for Thomas’ previously undisclosed son, whose name or whereabouts are unknown.  Stuck for so long in the past, the men’s quest becomes a symbolic last stab at the future.  As Thomas and Da, Graham Cuthbertson and Patrick Costello – with bald pates, furry ears and pleading eyes – deliver brilliant performances replete with vulnerability, wit and soul.

Trad is theatre doing very well what it does best.

Though the two men share a profound intimacy, in a bit of intriguing staging, they never actually make eye contact.  Throughout the play, they look constantly outwards, at us, yes, but more suggestively at the great unknown, and they speak to each other eerily across it.   We can’t help but lean into these men; they vaguely plead with us to answer a question they can’t quite formulate, or grant them a wish they cannot name.

Director Andrew Shaver also makes a couple of very charming cameo turns, and clearly the real-life friendships shared by the three men, lend heft and heart to the relationships created on stage.

Production design by Sarah Yaffe is exquisite.  A sort of rural junkyard – a floor covered in sawdust and thick coils of rope, a tarped-over boat, over-turned radio, and rusted wheel-barrow – is evocatively lit.  The live music that fills the silent interludes in the men’s journey, provided by guitarist, Greg Gale and fiddler, Bernadette Fortin, is Irish icing on the cake.  Throw in a few moments of unpredicted stage magic, and Trad is theatre doing very well what it does best.

In one scene, with an explicit breaking of the fourth wall, the play’s sensibility veered momentarily into sketch comedy for me, and I felt in this moment that the play came sadly, albeit briefly, out of itself.  This is perhaps just further testament though to the precious, cozy world the SideMartians had created, and the deep audience investment they had earned.

Though the piece is steeped in Irish history and questions of national identity, it’s ultimately a meditation on loss:  how much we can let go of before we ourselves are gone?  As Thomas and his Da wearily recite names off tombstones at the cemetery, we are reminded of life’s cruelties, the devastating nature of time.  So, carpe diem; see this play.

Trad continues to March 24
Posted by THE CHARLEBOIS POST at 4:15 PM