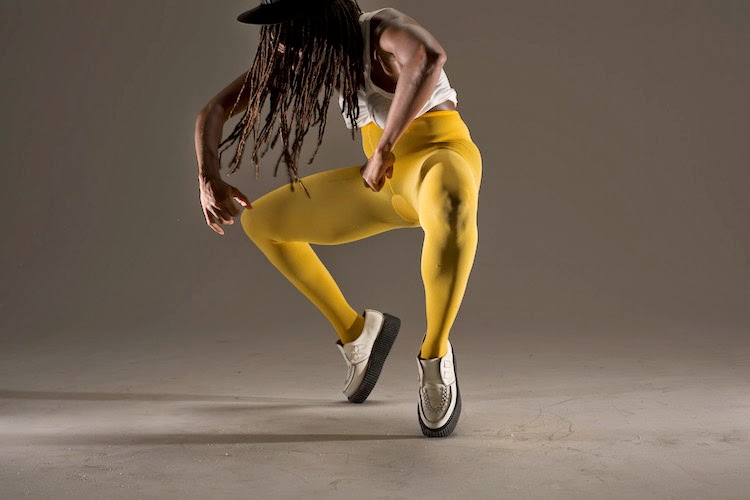 Dana Michel, creator and choreographer of Yellow Towel, manages to baffle you from the very beginning of the show. She entered the room in a baggy pair of black sweatpants, New York Yankees hat, over-sized sweater and clunky white shoes with gold spikes. It's hard to believe, at first, that the man we initially see on stage is actually a woman. She uses very brief moments to get in the skin of different characters and maximizes their existence on stage, whether it's a man or a woman or a child. Breaking into all the different typical black stereotypes, Michel uses speech to narrate her performance. When she was a little girl, she wanted blonde hair, so she would wrap her head in a yellow towel. This is a re-occurring symbolism throughout the piece. I couldn't pinpoint her origins, because at different points she spoke with a fluent Jamaican, Georgian and New Yorker accent. When I realized she was actually from Ottawa, I couldn't believe it.


Incorporating a lot of her own life moments, she uses her body and narration to depict living in her skin. She works with barely any props: two shot glasses, a carafe of milk, a yellow trumpet, a table, stool, two bananas, two bags of crackers and mini blow-up pool. She really doesn't need much because her presence is felt immensely on stage. Taking many moments from black history, Dana Michel manages to make you laugh. She also manages to make you really uncomfortable. The two are a peculiar and strong combination. She is mesmerizing in her movements, but I found the key to her idea was in her speech. She's very effective vocally, it was like watching television, but the channels kept changing. Physically, she is strong, flexible and calculating. This ties in very well with the spoken part of the show.

This performance isn't for everybody. If you're looking for something aesthetically pleasing - this definitely isn't it. If you want to experience a blast from the past from the eyes of a man, a woman and a child, then this is definitely worth seeing.