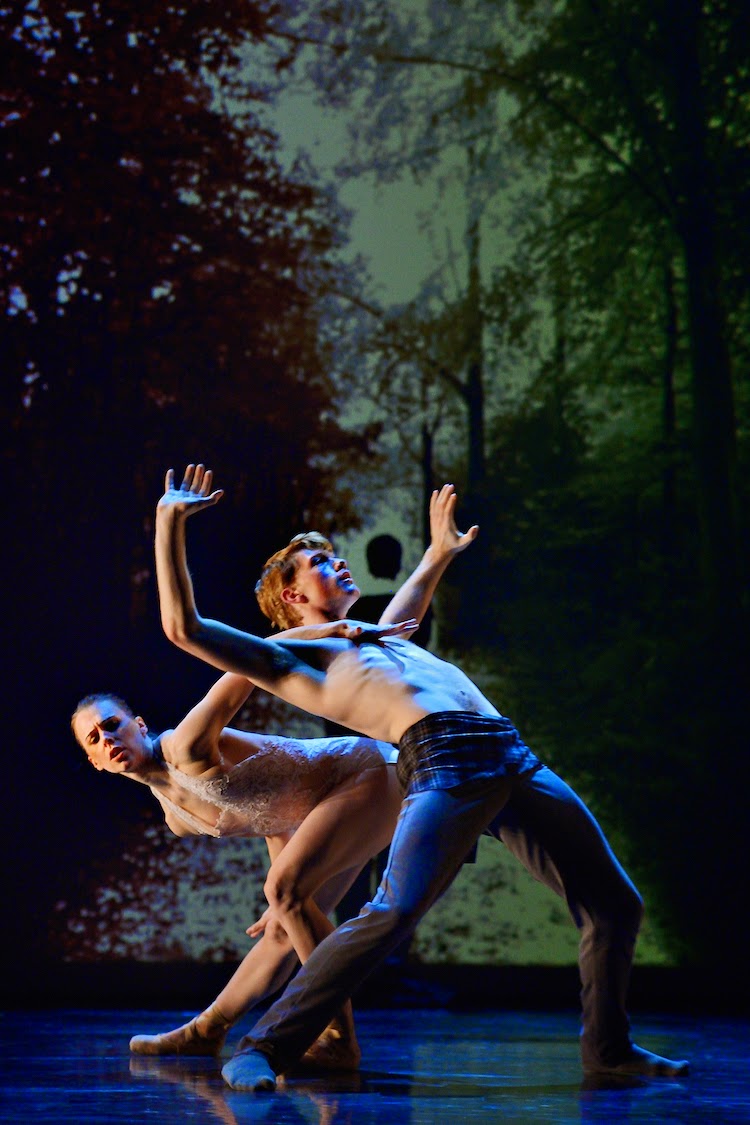 White Act (photo: Michael Slobodian)
From Athletics to Cerebral
by Jay Catterson
The Ballet BC 2014-2015 season launched on Thursday night with No.29, a bold collection of works from choreographers Jacopo Godani, Fernando Hernando Magadan, and Lesley Telford, which commemorates the 29th anniversary of the company as well as the 29th original work since the renewal of the company in 2009.


The evening started off with a bang and many, many clangs with the return of Godani's work A.U.R.A. (Anarchist Unit Related to Art), set to 48nord's electro-industrial score. Combined with Godani's costumes and fluorescent tube warehouse lighting, the work was evocative of a Utilitarian/Dystopian society. The piece was highly athletic and explosive, with great lines, shapes and geometric formations. With fluid movements interspersed with jarring poses and rigid formations, A.U.R.A assaulted your senses, yet was visually and emotionally resonant.
Following A.U.R.A. was the much awaited world premiere of Fernando Hernando Magadan's White Act. Inspired by the Romantic era, in particular the legendary ballet La Sylphide, Magadan's work was gorgeous and lush, yet eerie and tragic. The highlight of the piece were three beautiful pas de deux sequences that were emotional and effective. Hazy fog and ethereal video projection highlighted the amazing pointework by the female dancers and the athletic floorwork of the male dancers to tell a story that transcended mortality into the supernatural.
However, the final piece, the Ballet BC première of Telford's An Instant (inspired by the poem Could Have by Wislawa Szymborska as recited by Amos Ben Tal) fell short in comparison to the other two pieces that preceded it. Although highly energetic with impressive lifts and group work, the piece did not resonate emotionally with me. It seemed that it depended more on the score (Michael Gordon's Weather One) and lighting design to elicit a sense of fear and panic in the viewer rather than letting the movement create the same effect. Furthermore Telford's choreography felt more cerebral rather than intuitive and innate; this was more a thinking piece rather than one fuelled by emotion, and it came off starkly cold rather than enticing and intriguing.
Even though Telford's piece did not resonate with me the same way as Godani's and Magadan's works, Ballet BC's No. 29 was an impressive showcase of bold contemporary ballet that spoke volumes for the rest of the season to come.
November 6 - 8
Posted by THE CHARLEBOIS POST at 4:59 PM